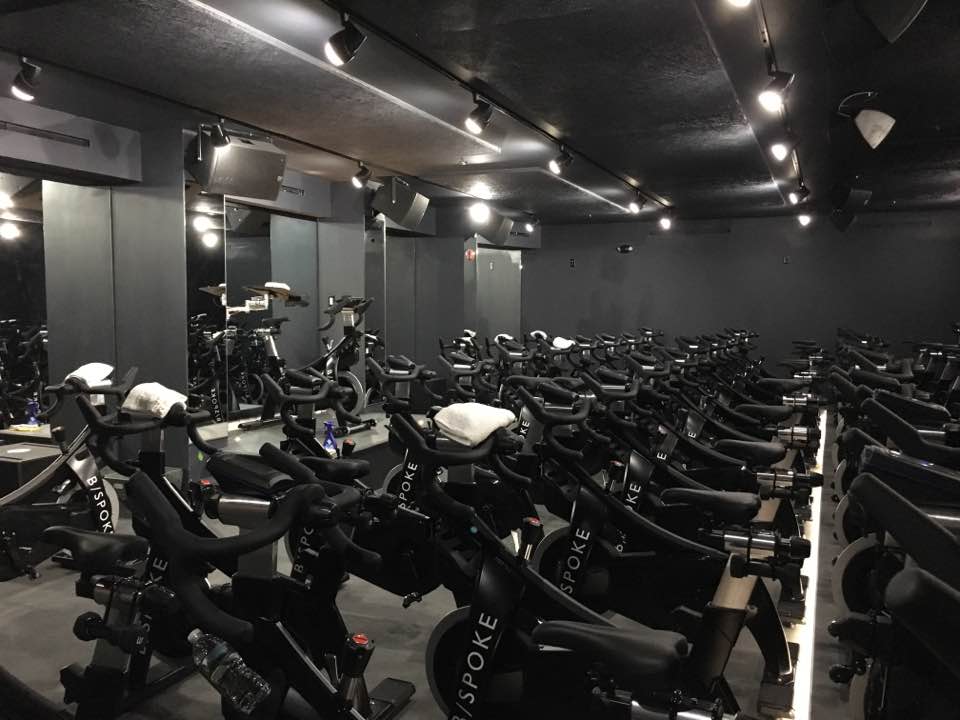 B/SPOKE, Wellesley’s newest indoor cycling facility, has officially opened its doors at 50 Central St. in Wellesley Square. Adjacent to Wellesley Bank, it’s a spot that has been home to a couple of pop-ups over the years. B/SPOKE is no here today, gone tomorrow pop-up, however. The 51-cycle studio is all about staying stationary.

Co-founder Mark Partin, who owns the business with Ryan Olsen, recently took me on a tour of the fitness business that has branched out beyond its Boston studio located near South Station. I entered from the Central St. side (you can also get in around the Church St. side, the same door you use to access HYP Yoga) and was greeted with silence and a single bike standing there, sculpture-like. Encouraged by the symbolism, I headed downstairs. Ah, that’s where the action is.

A friendly front-desk staff greeted me as I looked around in wonder, finally comprehending why they’d faced a couple of delays in opening. If you’d ever been down in the basement of 50 Central St. in its “before” state — and I have — you’d understand. B/SPOKE’s owners decided they were all-in with this thing and embraced a gut renovation, turning what was once a dark, dank, narrow basement space into hipster heaven. The women’s locker-room area offers hair dryers, curling irons, straighteners, fluffy white towels, and four showers with Aesop products. There’s also a men’s locker room area, of course, but I gave the guys their privacy.

Overall, the lines are modern. The palette is subdued. The clientele on the day I stopped in was very, very fit.

But don’t let those buff veterans of the cycle scene scare you. B/SPOKE offers “intense but attainable” classes, and as someone who has taken lots of classes from step aerobics to hot yoga and everything else in between, I can tell you that success in a new class is all about checking your ego at the door. Go in, try to impress the teacher, or the person next to you, or the 20-year old hiding inside your middle-aged body, well, you’re going to come away deflated and, once the lactic acid kicks in, awfully sore. My advice: take it gradually and enjoy the ride.

B/SPOKE adds to the cycle fitness options in town, which include longtime indoor cycling joint Cyclebar at 386 Washington St. (where a singe drop-in class is $20).