UPDATE (1/26/18): CBS Boston reports that Zoots stores will open for one day, Feb. 2, for customers to retrieve their items. Those who can’t pick up items then will the chance to do so later at a central facility to be determined.

Here’s a quick update on Zoots, the dry cleaning chain with two locations in Wellesley that’s set a new precedent for how not to go out of business gracefully.

Associated Press reports that plans are being made to return clothes to customers over the next week. (Some bags of clothes at the Lower Falls store in Wellesley have been accessible.)

Some customers were sent email with this message from an attorney assigned to work with what passes for a management team at Zoots: 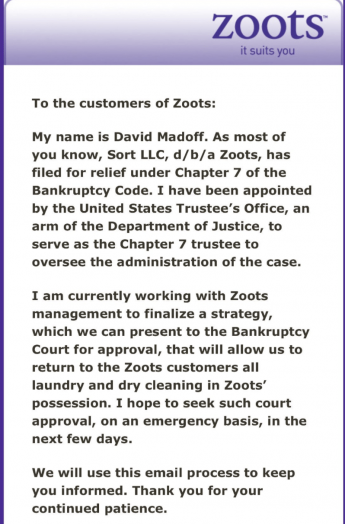 State Attorney General Maura Healey told Boston Public Radio that her office is on the case as well.

The Zoots Facebook page has been killed off, presumably to avoid more public criticism.

Feel free to reach out if you have additional info that might be helpful to Zoots customers: theswellesleyreport@gmail.com