While some of the gun violence protests scheduled for Wednesday in Wellesley got postponed due to the blizzard’s aftermath, others marched on in Wellesley and Boston on the one–month anniversary of the Parkland, Fla., school shooting that claimed 17 lives.

Dozens of Wellesley students, off for their second straight snow day, headed into Boston to take part in a rally for stricter gun laws. Attorney General Maura Healey posted about the rally on her Facebook page, and familiar young Wellesley faces can be seen.

In Wellesley itself, 7th and 8th graders “walked throughout the town holding signs and chanting,” says student Annabelle Nolan.

Enough is enough! It’s time for CHANGE. So happy to see the students protesting for changes to the gun laws in the USA 🇺🇸 #enoughisenough #enough #enoughalready #guncontrol #guns #studentprotest #Wellesley #massachusetts

A mix of other residents (including parishioners from St. Andrew’s Episcopal Church) gathered at 10am near Village Church in Wellesley Square. The gathering outside the church took 17 minutes, a minute each for the lives taken during the shooting.  Participants “held hands, said a prayer, then shared their thoughts about gun violence in the United States at present and their hopes for positive change,” says Charlene Smith, who shared this photo from the gathering. 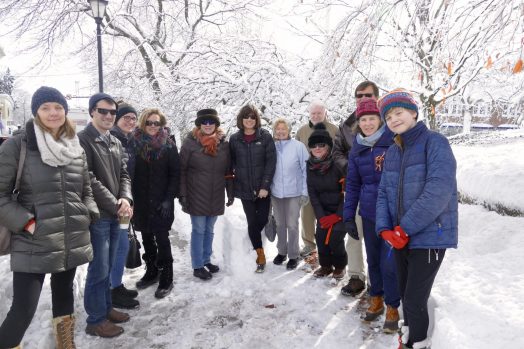