About 220 students out of an upper school student body population of 351 at Dana Hall School walked out of classes on April 20 to protest gun violence in the United States. Dana Hall, located off Grove St., is an independent boarding and day school for girls in grades 5-12.

According to student organizer and Dana Hall senior Kate Okun, “We each walked out for a variety of reasons, but collectively we walked to urge law makers to construct and vote for gun control and reform policies. We also walked to encourage the citizens of Wellesley to consider gun control policies. But overall, most of us walked with the important message that silence is the same as being complicit. We walked because so many young adults and children will never get to use their voices due to the gun violence, so we must use the most powerful device we have, our voices, to make changes and be heard while we have the chance.”

Seven students first delivered speeches on campus and then the group walked along toward Washington St. and Town Hall. There were some tears during the speeches as speakers shared their personal experiences and how the after-effects of gun violence have impacted them. Okun said that overall, however, the mood was energetic and hopeful as the students worked toward making changes through taking a stance.

Jessica Keimowitz, director of the Upper School said, “I’m proud of the work that Dana Hall students did to prepare for and lead a walkout to promote gun safety and safety in schools. Our students were disappointed that they couldn’t participate in the March 14 walkout, since it happened while we were on Spring Break. Instead, they turned their attention to the National School Walkout movement on April 20. The students were very clear with adults in the community that they wanted the protest to be student-initiated and student-led. Our girls were organized, they communicated with different constituencies clearly and thoroughly, and they led a thoughtful and well-attended protest.”

The middle school student population of 131 students was not allowed to leave the campus to march with the upper school for safety reasons, but about 25 of them attended the speeches, which were delivered outdoors on campus.

In addition to the walk-out, there was a “die-in” earlier that day in which 13 students lay silent and still on the floor of the student center for 15 minutes to remember the 13 lives that were lost in the Columbine High School massacre 19 years ago. Each wore a shirt with a couple of words to spell out a Stephen King quote: “How many have to die before we will give up these dangerous toys?”

“This was an especially powerful movement because students usually pass through the area at that time to get snacks before 3rd period.” Okun said. “The mood there is usually bubbly and energetic as students are seeing their friends and having a short break from classes.  However, on Friday the whole area was nearly dead silent for the whole 15 minutes as students walked through to collect their snacks.”

As part of the process, Dana students made sure they had all of their permits worked out ahead of time so that they could conduct a legal protest. Okun said that the administration cooperated with students in allowing this walkout to happen, but that it was entirely student led. As with the protest last month at Wellesley High School, Wellesley police were on hand.

More pictures…(thanks to Kate Okun for sending these along) 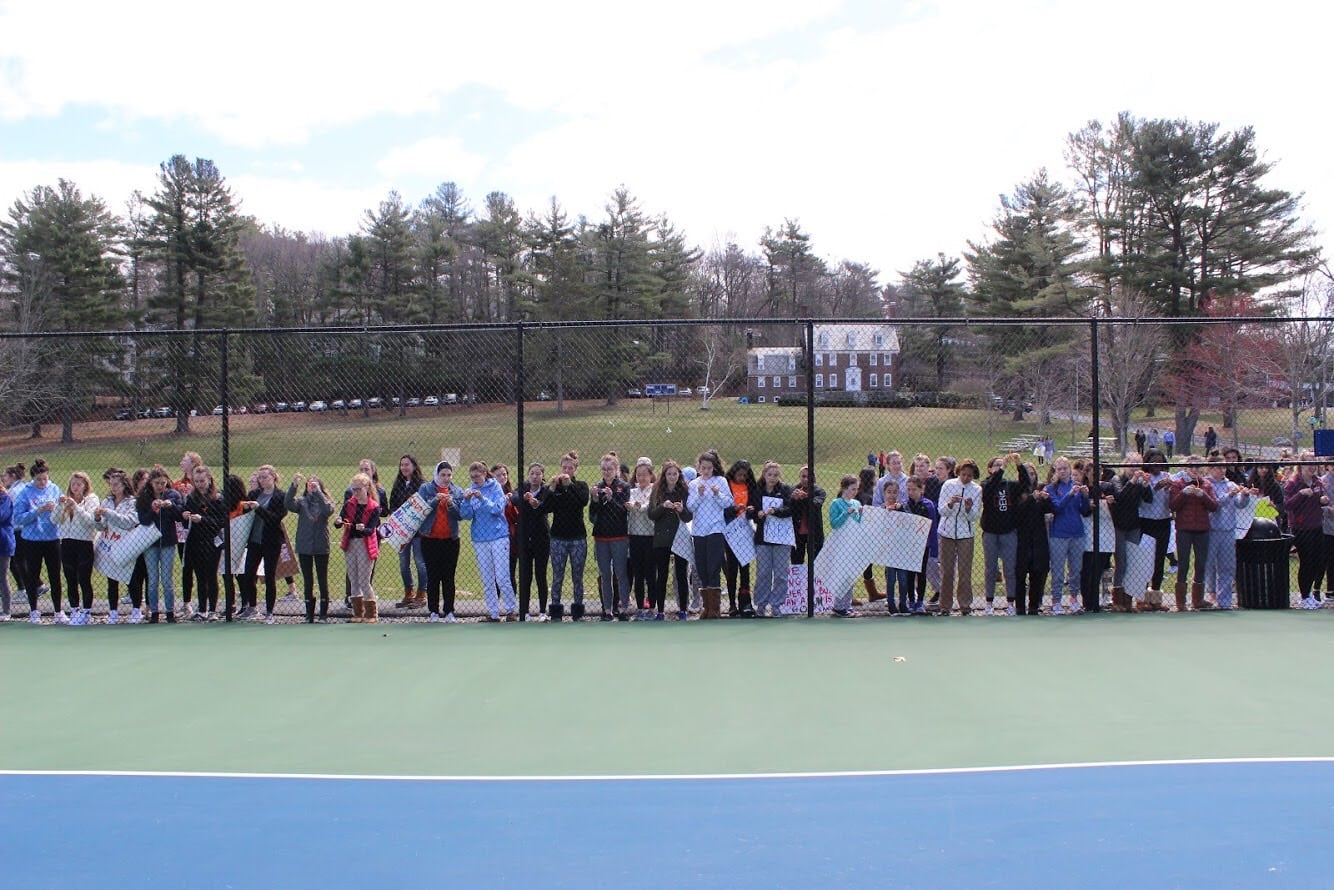 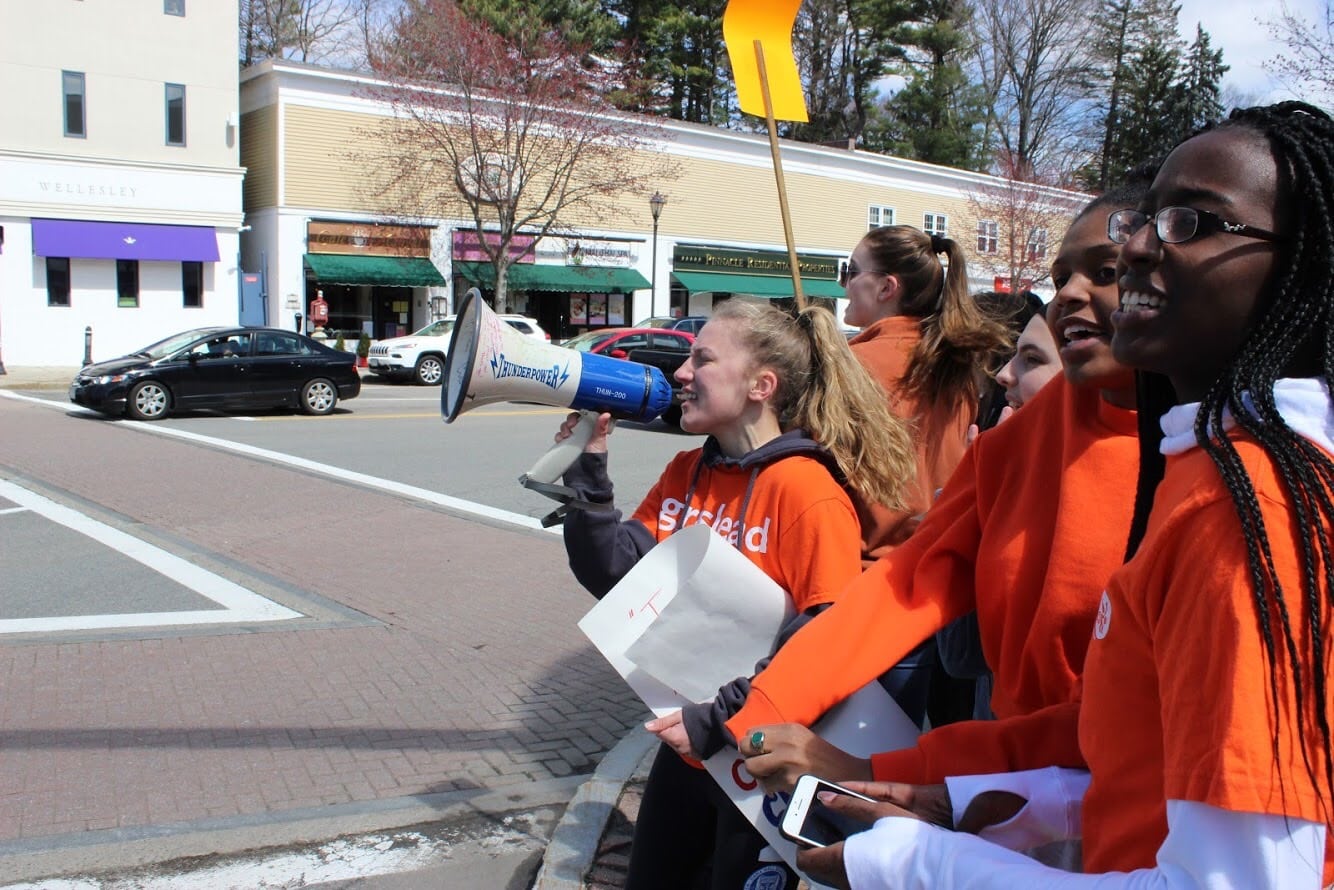