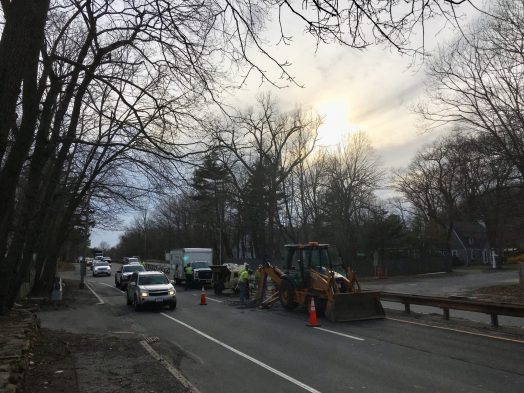 Wellesley Police Chief Jack Pilecki told Wicked Local that:“A trench collapsed on Route 9 eastbound by Arnold Road. The gas company had previously replaced a gas line there, but now it appears the water drain line which is under the gas line caved in.”

Only in Wellesley would it be the tidiest sink hole ever, a nice and even rectangle. No gaping maw of an amorphous chasm for us, no siree.

Thanks to the tipsters who got in touch with me to let me know about the three helicopters hovering around that area (although a low-flying helicopter in another part of town was aiming to take down mosquitos before they get going). One reader’s response to the hullaballoo: “You’d think aliens are invading, there are so many helicopters.”

Oh, but when the aliens come, they will be emerging from sink holes. Everyone knows that.