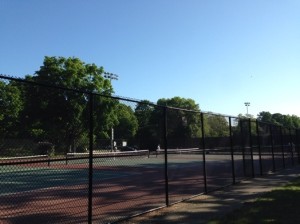 According to the Wellesley Park and Tree Division, the Hunnewell Fields tennis courts will be renovated this summer. All cracks will be sealed, and each court will be completely re-painted.

Department of Public Works Director’s Office employee Kristen Knudson-Groh said in an email that work on the Hunnewell courts  “…will be done in two phases to allow four of the eight courts to stay open. Phase One of the project will begin Monday, August 13th, renovating courts #5 thru #8, and the practice area. Phase Two will start August 27th, renovating courts #1 thru #4.”

This schedule may be subject to change, due to weather.

Also during this period, the tennis courts at Schofield School will be closed for the same type of renovations. One of the two courts being renovated will include lining for Pickle Ball. Pickleball, if you aren’t familiar with it, is an increasingly popular paddle sport for 2 to 4 players that borrows from tennis, badminton and wiffleball.  Wellesley hosts Pickleball games at spots such as the Rec Center at the Warren Building and at BSC Wellesley, and its popularity led to local players urging the town to line a couple of courts for outdoor play. Sounds like a sweet dill for everybody.

The $60,000 project is funded through the DPW’s Tax Capital, and the contract has been awarded to Vermont Recreational Surfacing & Fencing, of Barnet, Vermont.