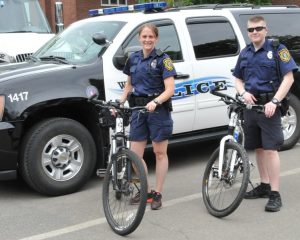 On June 4, 2018 at 7:53 p.m. Officer DeBernardi was dispatched to Granite Street at Crown Ridge for a report of a male party who appeared to be unconscious in a motor vehicle.  Cataldo Ambulance had been dispatched to the call as well and arrived prior to the officers.  A medic from Cataldo Ambulance found the operator was asleep in the driver’s seat with the vehicle in drive.  The medic placed the car in park and removed the keys from the vehicle to ensure the safety of those present.  Officers spoke with the operator and observed that his eyes were glassy and bloodshot, his speech was slurred and he was unsure how he got to the intersection of Granite Street at Crown Ridge.  While speaking with him they could detect an odor of an alcoholic beverage emanating from the vehicle and his person.  He initially agreed to take some reasonable tests of balance and coordination, but upon exiting the vehicle declined to take them.  He was unsteady on his feet and had to lean on the vehicle to maintain his balance.  He was taken into custody, transported to the station, booked in the usual manner and held on bail.

On June 6, 2018 at 11:30 a.m. Officer DeBernardi was on patrol on Washington Street near Worcester Street when he observed a blue Ford pickup truck and conducted a random query of the vehicle’s registration.  The query showed there was an active warrant issued by the Waltham District Court for motor vehicle related charges for the owner of the vehicle.  He stopped the vehicle and spoke with the operator and owner.  He was taken into custody, transported to the station, booked in the usual manner, afforded all rights and transported to Dedham District Court.

On June 4, 2018 at 10:08 a.m. Officer Lindelof spoke with a male reporting party at the police station regarding graffiti that had been discovered in the area of the Rocky Ledges.  The reporting party stated that graffiti was spray painted on a rock in the Rocky Ledges and he wanted to make the police aware of it prior to removing the graffiti.  There are no suspects.

On June 4, 2018 at 2:13 p.m. Officer Cunningham spoke with a reporting party about identity theft.  The report is incomplete at this time and no further information is available.

On June 4, 2018 at 11:15 p.m. Officer Fritts spoke with a male reporting party at the police station regarding a lost or stolen cell phone.  The male reporting party stated that he had taken an Uber home at 3:00 a.m. on June 3, 2018 and shortly after getting out of the Uber realized that he did not have his cell phone and thought he had left it in the Uber.  He contacted the Uber driver who advised him he had several other fares after him and that none of the passengers indicated they had located a cell phone in the vehicle.  The phone was not actively on and Officer Fritts was unable to successfully track the phone with the Find my iPhone application.

On June 6, 2018 at 9:46 a.m. Officer DeBernardi spoke with a female reporting party at the police station who stated earlier in the morning she had been involved in a road rage incident with another vehicle on Washington Street near Laurel Ave.  She stated that she inadvertently cut off a blue Ford pickup truck and the driver began driving very aggressively and was weaving in and out of traffic behind her.  She stated the male driver exited the vehicle on Washington Street near Cliff Road and began yelling at her.  She wanted to make the police aware of the incident in case there were similar incidents that occurred with the same vehicle operator.

On June 8, 2018 at 1:14 p.m. Officer Gover spoke with a reporting party from Bethel Road regarding a possible check fraud incident.  The report is incomplete at this time and no further information is available.

On June 9, 2018 at 11:00 a.m. Officer J. Popovski spoke with a reporting party at the police station regarding some posts on a youth’s social media account that were concerning.  Officer Popovski spoke with the youth’s parents and then the youth.  After speaking with the officers the youth realized how the posts could be viewed by others, apologized and indicated they would be removed from his social media account.