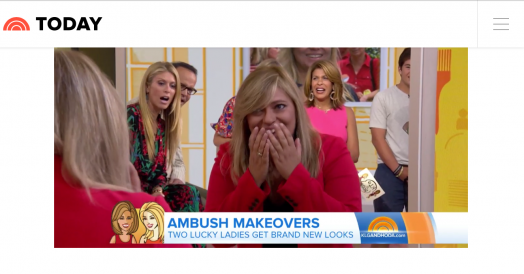 Tiffany Zides, a Wellesley woman visiting New York City this week with her family, was one of “two great girls” plucked from the Today Show throng at Rockefeller Center to get an Ambush Makeover by fashionistas Louis Licari and Jill Martin.

In the truly bizarre segment, in which hosts get downright nutty (“Louis Licari, la la la la la…”), two women were “plucked and then plucked some more” by the make-up and fashion experts (not to mention an assistant named Igor).

Now we’ve known Tiffany for years and while she absolutely didn’t need a makeover, she felt “very lucky and psyched” to get one.

Zides, a teacher getting ready for the new school year, reportedly had her son Owen, a Wellesley High student, reschedule his college tour the morning of the event to get a shot at the makeover.

Once Licari and Martin worked their magic, Tiffany strode onto stage while her husband Evan and son Owen (the ones who really needed the makeovers) awaited the results, while blindfolded.

The big reveal showed Tiffany with golden highlights in her hair, and a fetching outfit featuring a red blazer from Talbots and Ann Taylor shoes (she got to keep the clothes,  but not the shoes or jewelry). The guys scored points with appropriate “Wows” and Tiffany herself, upon looking in the mirror asked: “Is that me?”

I guess she’ll find out upon her return to town. Will anyone recognize her?