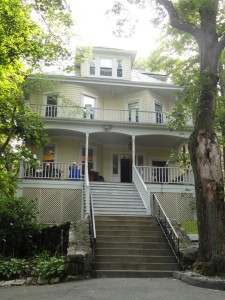 Since 1972, when the first eight Wellesley A Better Chance (ABC) students came to live in the Wellesley College-owned yellow house perched at the top of a steep hill, that housing situation was always said to be temporary. But then three years turned into ten, which turned into 46, all in the blink of an eye. Now the ABC Board has announced that it’s time to move toward a permanent housing situation.

“We are excited to announce our capital campaign, “A Home of Our Own,” said ABC Board Presidents Catherine Ward and Ingrid Houghton. “A permanent home will allow us to grow and thrive for decades to come. Better educational opportunities lead to better lives. This premise has been proven true year after year. Wellesley A Better Chance has helped educate nearly 100 women of color at Wellesley High School. All of our graduates have attended college and lead successful careers.”

Although the next ABC house will not be owned by Wellesley College, the private approximately 2,500 women’s liberal arts institution is expected to remain involved in the program. Director of Media Relations Casey Bayer said, “The College is committed to ensuring — through academic and financial support — that the WABC students are fully supported throughout their high school years, that they graduate with an outstanding secondary education and that they are well prepared to pursue their academic and professional interests. Additionally, the students have access to on-campus events and services at the College, and Wellesley College student tutors five nights a week at the WABC house.”

At this time there is no word on how Wellesley College plans to repurpose the current ABC house.

ABC is a boarding-school type program that provides academically talented and promising young women of color from underserved communities the opportunity to live in Wellesley and attend school at Wellesley High School. While eighth graders in their home community, the students went through a competitive application process, which included visits to Wellesley and interviews with a search committee. Once accepted, they entered WHS as freshman to form a new home-away-from-home community in a house owned by Wellesley College, where they are supervised and cared for by a Resident Director. In addition, multiple volunteers and donors keep the program running.

There currently are four students attending WHS through the program. Typically there are eight students in residence (two in each grade). Freshmen were not admitted this year, presumably due to the upcoming housing changes, and two seniors graduated last May, leaving four scholars in residence.

More than 300 of the nation’s leading boarding, day, and public schools participate in an ABC program. Massachusetts Governor Deval Patrick entered Milton Academy through the prestigious, private boarding school’s affiliation with ABC, and singer/songwriter Tracy Chapman was an ABC student at the Wooster School in Connecticut. Wellesley ABC counts a Bill and Melinda Gates Millennium scholarship recipient among its alumnae, and has a 100% success rate of sending all its students on to 4-year colleges.

Each Wellesley ABC scholar is assigned a host family for the four years they live in Wellesley. The scholars spend one weekend a month at their host family’s home participating in the activities of that family. Whether they are cheering on the students during times of accomplishment or are there in times of emergency, the host families are the students’ and the students’ families’ assurance that someone is looking out for them.