The boys’ soccer team battled Ludlow to a 0-0 tie in regulation on Saturday in Lynn, but the Lions’ Michael Tuck headed in the winner just 24 seconds into overtime to give his undefeated team the title. The game attracted a huge turnout.

Congratulations to the Boys Soccer Team on a great season and State Tournament!
Thank you to all the fans that came out to support the Team tonight. There was a huge crowd and they were awesome. pic.twitter.com/KWZMtkWACP

Wellesley High’s boys’ and girls’ cross teams qualified for the All-State Championship on Sunday in Westfield, which yes, did get more snow than Wellesley. Runners had to navigate a snowy, slippery course, which had the potential to make performances less predictable. But in the end, the usual suspects prevailed in both the boys’ and girls’ races, and the Wellesley boys’ narrowly finished behind winner Concord-Carlisle, while the girls placed fifth. The Raiders were led by Colby Zarle and Jason Norris, while Maggie Donahue finished first among Wellesley girls and second overall. 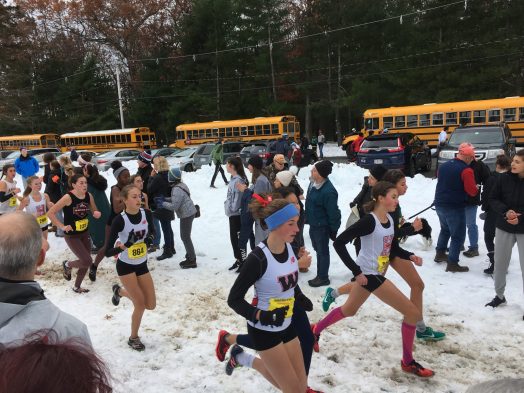 Also on Sunday, the WHS swim & dive team ended its strong season with a second place finish behind Reading at the MIAA D2 championship at Harvard University. Full results here.