Happy Hanukkah, Wellesley. Did you happen to notice that the town menorah was outright absent leading up to Hanukkah? Have you further noticed now that the Festival of Lights has officially begun, the menorah has made its appearance, but it’s been kind of nomadic?

I have, and it’s made me a little crazy. It’s made my family a little crazy, too, because when mom can’t find the menorah to update pictures on Swellesley’s Facebook and Instagram, that becomes everybody’s problem. Technically I’m all about letting there be peace on earth during the holiday season. However, peace on our family’s little corner of  Wellesley earth is not going to begin with me until that menorah is tracked down for good. I think I’ve got a good handle on things now, but it took time. Settle in for The Story of the Missing Wellesley Menorah.

I’d been stalking Town Hall for a few days before Hanukkah, looking for my photo op. As is usual in early December, the Christmas tree went up on the upper lawn of Town Hall, and the crescent beside it. But the menorah hadn’t taken its position as part of the trio. I became fretful, wondering what could be wrong. Was it broken? Had the Grinch stolen it, claiming he’d fix it in his workshop and would bring it right back? Had it been misplaced during the ongoing work on the Town Hall envelope project?

I could’ve gotten to the bottom of it right away by simply calling Town of Wellesley Communications Director Stephanie Hawkinson, but I kept procrastinating. The fact is, I’d latched onto the idea of the menorah suddenly reappearing as some sort of holiday miracle, and the notion was putting me straight into the spirit of the season. I decided to remain uninformed for as long as I could, which meant not emailing Stephanie until Sunday afternoon, a few hours before the first night of Hanukkah would begin. I was taking my chances, true. Not everybody checks their email on Sundays, and it’s actually sort of rude to expect it, but I was all in on the holiday miracle idea, Sunday emails and all, so I went with it.

Would Wellesley have to curse the darkness?

Sunday came, and so did the Holiday Stroll. I wandered through the Square taking pictures of Santa as he arrived in a fire truck, welcomed by carollers. It was all great fun, but I was getting desperate. I needed that menorah picture. The afternoon sun was creeping west, and there was still no holiday miracle in sight. Time for a tough journalistic call. Wellesley Toy Shop would have to be the place for my menorah shot. I stopped in to plead my case to shop owner Andy Brown (no relation). The place was jammed packed with Holiday Stroll shoppers, but after hearing my predicament he waved me over to the front window, where he had several menorahs on display. “Help yourself”, he said as he rang up a customer. I took one of the menorahs, propped it up on a ledge in the store and snapped a pic.

It hadn’t been easy, but I had found a menorah in Wellesley. A little deflated, I knew the window of opportunity for a holiday miracle had slammed shut. It was time to open the email door. “Stephanie, where’s the menorah,” I asked?

“It’s been moved to the fire station just for tonight and will be lit as part of the Holiday Stroll celebrations. It will be back at Town Hall tomorrow,” she emailed right back.

I face palmed. How could I not have noticed it in front of the fire station all the times I was back and forth for the past few hours? I had JUST been over at that end of the Square taking pics of Santa. Wow, I must really be blind.

At home I asked my son to go get the menorah pic. “Sure,” he shrugged, used to being sent out on such Swellesley errands.

He came back, mission accomplished. I asked how it went. “Well, it wasn’t up so I went into the fire station to find out where it was. It was kind of not ready to go, so I helped the guys put it up. It’s pretty much held together with duct tape and prayers. Definitely on its last legs.”

And in fact, the Menorah was lit in front of the station when darkness fell. Swellesley reader Corrine Hansen Taylor kindly shared a photo on our Facebook page:

Now I’m at the library running surveillance. The giant window on the second floor is the perfect vantage point for monitoring the menorah situation. It hasn’t made it over to Town Hall yet, and it’s not at the Fire Station either, but who’s worrying? There are still hours to go until night falls. My hope for a holiday miracle has been replaced with confidence that, like the first night of Hanukkah, Festival of Lights Night #2 will not pass by Wellesley in menorah darkness.

But if things start to look uncertain, and the menorah seems even more on its last legs than it was last night, somebody please let me know. I can always send my son over with a fresh roll of duct tape.

As of this afternoon (Monday, 12/3), the menorah is over at the Wellesley Municipal Light Plant getting a tune-up for tonight.  “We may need that duct tape,” says the town’s Stephanie Hawkinson.

And ta-da! The holiday display in front of Town Hall is now complete: 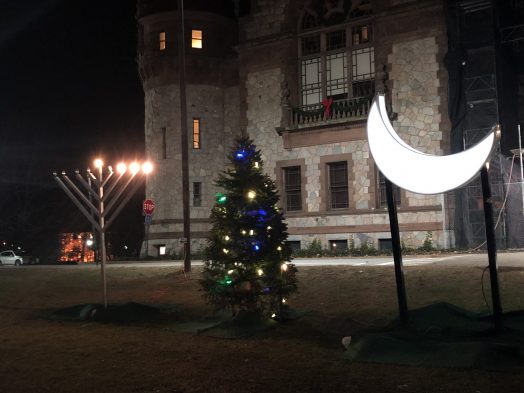