Wellesley author Elizabeth Suneby’s latest in a series of socially-conscious children’s book has just been recognized with an award from the American Association for the Advancement of Science as the top children’s science picture book. 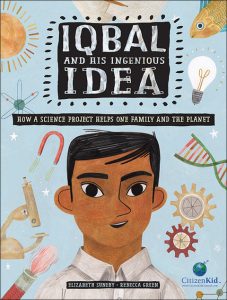 Iqbal and His Ingenious Idea: How a Science Project Helps One Family and the Planet, written by Elizabeth Suneby and illustrated by Rebecca Green, tells the story of a Bangladeshi boy who sets out to build a smoke-free solar cooker in light of the damage that cooking over indoor fire during the monsoon season is having on his family’s health. The device might also earn him a sustainability award from his school, and instructions are provided in the book on how to concoct such a solar cooker with a pizza box and aluminum foil.

Suneby learned about the issue of 3 billion people cooking over open fires or stoves using wood, coal or other solid fuels while working on the first book she wrote for the Citizen Kid series, Razia’s Ray of Hope: One Girl’s Dream of an Education. To further learn about the issue, she worked with the UN Global Clean Cooking Alliance in the United States and Bangladesh, Solar Cookers International as well as with local Bangladeshi students.

“Each of the Citizen Kid books… addresses one issue to help kids become world citizens,” Suneby writes. “Cooking is a daily activity every kid can relate to — and they should understand and care that for a huge portion of the world’s population, it is a task with many issues,” such as harming the environment, causing health issues, and dis-empowering women.

The book, geared toward kids in grades 3-7, is available locally (autographed editions at Wellesley Books) and online.