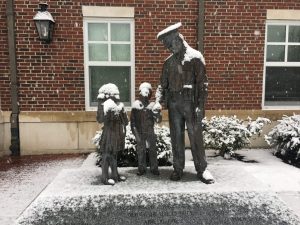 On February 26, 2019 at 2:10 p.m. Officer Dennehy spoke with a male reporting party who stated someone used his PayPal account on February 12th to pay for a MacBook Pro and also made a credit card payment.  He learned the MacBook Pro was delivered to an address in Boston on February 15th.  The incident is under investigation.

On February 27, 2019 at 7:50 a.m. Officer Rosenberg spoke with a school administrator about a suspicious email that was received by a teacher the previous night.  The email was not threatening in nature but spoke about the teacher’s style of grading not being liked.  The incident is under investigation.

On February 27, 2019 at 10:49 a.m. Officer Cunningham spoke with a female party at the police station who stated she received a call from a package delivery company who stated a package that was delivered to China from California was refused by the police in China and the police wanted to speak to her about the package.  The caller then allegedly transferred the call to the police in China and they asked for her banking information and her Chinese identification number.  She provided the information and then hung up and contacted the package delivery company that stated they had no package and did not call her.

On February 27, 2019 at 3:40 p.m. Officer Cunningham spoke with a female party regarding larceny from her business.  She stated she noticed the funds in an account seemed low and when she reviewed the account she noticed $26,700 in fraudulent checks had been passed on the account.  On February 28, 2019 Officer Cunningham contacted the reporting party for the documentation regarding the fraudulent checks and she indicated the fraudulent transactions were greater than she had reported the previous day and she was still gathering all of the information together.  Officer Cunningham suggested she consult with a forensic accountant to check her accounts.

On February 28, 2019 at 9:00 a.m. Officer Cunningham spoke with a male reporting party who stated there were approximately $20,000 of fraudulent charges on his business credit card that were made in 2018.  The reporting party had already spoken with the bank and they were not going to reverse the charges because he had already paid the bill.  Officer Cunningham spoke with the bank and was advised that they had contacted the reporting party in the past and advised him there were some suspicious charges on the account and he indicated to the bank that the charges were not fraudulent at the time.  The reporting party resides in Boston and his business is located in Boston.  He was advised he needs to report the fraudulent activity to the Boston Police Department.

On March 1, 2019 at 9:10 p.m. Officer Griffin spoke with a female party at the police station who stated her Canada Goose winter coat, valued at $580 was stolen on February 26, 2019 between 8:45 a.m. and 2:30 p.m.  The reporting party stated she put the coat in her locker in the band room at Wellesley High School and locked the locker.  At 2:30 p.m. when she returned the locker was still secured but the coat was gone.  There are no suspects at this time.

On March 3, 2019 at 2:24 p.m. Officer Lindelof spoke with a reporting party from Thomas Road about credit card fraud.  The report is incomplete at this time and no further information is available.

Got a security or other relevant business that would make for a great sponsor of the weekly Wellesley Police log? It’s easy and fun to partner with us, and you get great exposure for your business or non-profit. Let us know