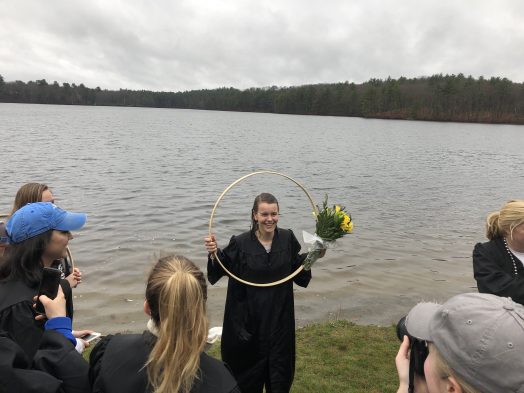 Many of the gowned Wellesley College seniors who took to rain-slickened Tupelo Lane with their wooden hoops for the annual hoop rolling race couldn’t get out of their own or each other’s way. It was a slightly less chaotic and dangerous scene than the running of the bulls. But Paige Hauke maneuvered relatively gracefully from her front-of-the-pack starting position to the finish line of the 1/8 of mile course, which sits not far from where Boston Marathon runners will stream by on Monday.

As a field hockey player, Hauke had an advantage over many of her fellow hoop rollers: She’s used to being stooped over while running. The skills in these two activities easily translate. 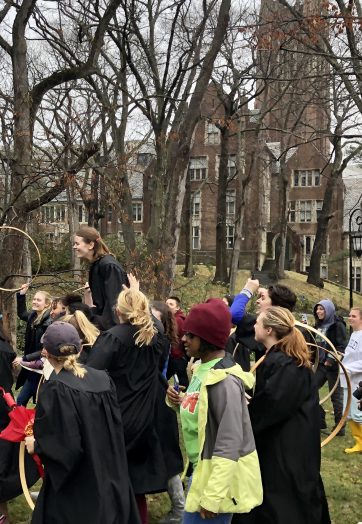 The chemistry and English major’s achievement in this Wellesley College tradition, which has been taking place since 1895, earned her a bouquet of flowers, a ride on her classmates’ shoulders and then a refreshing dunk in Lake Waban. 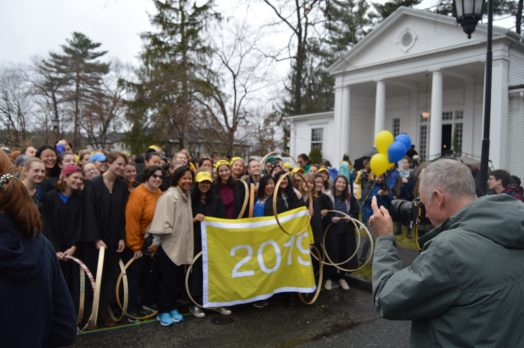 In the old days, Wellesley College said the first woman to cross the finish line would also be the first in her class to get married. But now the story goes that the victor will be “the first to achieve success however defined.” This certainly will be an eye-catcher on Hauke’s resume.