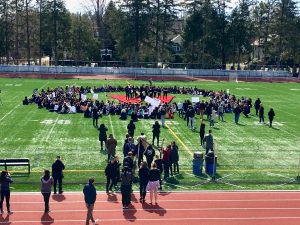 Wellesley High School student group Young Ethnic Scholars (YES) and World of Wellesley (WOW) invites everyone to participate in a Community Dialogue on Monday, May 6, 7pm – 9pm at the Wellesley Free Library.

Earlier this month during a walk-out organized by YES and attended by members of the group and their allies, student speakers said the whole town of Wellesley must take responsibility for racist incidents that have occurred in the school. WOW President Michelle Chalmers said, “YES has asked for the community to engage and we invite you to answer that call. Everyone is invited to peacefully engage with our students together.”

YES is an approximately 60-member group of students of color and their allies with a stated goal to “take action against the racial injustice rampant in YOUR community.” Earlier this month, members of the group and other WHS students, approximately 300 in all, walked out of Wellesley High School and onto the athletic field in protest of racist incidents that have happened in the school, including an anonymous racist email sent to a WHS African American teacher.

In an online update to the school community regarding that email, Jamie Chisum said, “Despite the efforts of all three assistant principals, the school resource officer, other members of the WPD, and our tech department, we have no solid evidence to connect any individual to the email sent to one of our teachers early last month. There was not sufficient evidence found to get a subpoena. There have been interviews with students, guidance counselors (in case they heard something), and I’ve personally spoken to all the teacher’s classes. We’ve done psychologist profiles, and of course met with the teacher for insights. My hope has been that eventually a student would step forward and tell us who did it – perhaps this week’s events will help someone come to this conclusion. We are keeping our eyes and ears open.”

RSVP here to the May 6 Community Dialogue event.

More about the walkout: