Wellesley’s got plenty of great concert opportunities from school events to the town band and summer concert series at the Town Hall green. But if you’re looking to branch out and catch a full-blown music festival locally, or perhaps are looking for a fun graduation or birthday gift, here’s what’s on the spring and summer agenda.

(We’ll add more festivals and events to this post as others crop up.)

If you haven’t been to a festival in a while, a few words of wisdom from someone who in recent years has hit everything from Boston Calling to the overnight camping extravaganza of the Firefly Festival in Dover, Del., to the Newport Folk Festival:

*Dress appropriately, which can mean packing a poncho or an extra layer (well, you can always invest in a show sweatshirt if you get chilly, too)

*Read the festival rules ahead of time regarding backpacks, cameras and food. Most are good about providing access to free water and sunscreen. Most also let you bring in snacks to supplement what you might buy for meals.

*Most festivals these day have phone charging stations, but it’s not a bad idea to bring a portable charger.

*Pace yourself: Look for opportunities to rest your legs and duck the sun. Yeah, you might wanna get up close and jump around for certain acts, but others are better for taking a peek at then hanging out and listening from a seated position.

*Bring ear protection. I’ve been happy with a set of Vibes ear plugs.

Boston Calling can be tricky for the Wellesley set opening its summer homes on the long weekend that kicks off summer. But with many in town still sticking around with kids in school, Boston Calling is a half hour away and offers a mix of music for many tastes. I’ve been to Boston Calling every year since it started (originally on City Hall Plaza) and have always had fun. Yes, I have a more diverse musical taste than most guys of a certain age, but still, I love to encourage people to break out of their comfort zone.

Two of this year’s 3 headliners (Tame Impala and Twenty One Pilots  — the latter of which put on a memorable show in 2014 when the drummer with drum kit surfed the crowd) are Boston Calling returnees. Rapper Travis Scott is new.

I tend to go more for the undercard than the headliners, as you can get up close and personal with more of the artists. Acts worth checking out this time around include Mitski, Tank & the Bangas, Big Red Machine (Bon Iver’s Justin Vernon & The National’s Aaron Dessner join forces), and the quirky local college student Sidney Gish. The line-up has changed, with a few acts dropping out, but others including Chvrches and Betty Woo have been added. Set times have been released to help you plan out your day or days if you are interested in attending.

Boston Calling has worked out the kinks from its first go at Harvard a couple of years ago, which means the portable toilets and food options are plentiful, pathways between shows are easier to navigate and you can grab a respite from possible heat or rain inside the hockey arena to watch comedians and other performers such as DJs and the Boston Ballet.

The event has 3 main music stages, 2 of which alternate with live acts and the third is far enough away from the other 2 that you don’t hear overlapping sound. There are options for sitting and standing to give yourself a break at the event: one stage has bleachers off to the side.

Single day tickets start at $120, but you do get a lot of music for you money if you hunker down for most of the day/night. For those of you who want to bring kids, it’s loud, but if you gear them up with ear protection know that the event is free for children 10 and under. I’ve seen plenty of Wellesley teens (including our own) at Boston Calling over the years. It’s good, mostly clean, fun.

One great thing about Boston Calling is that you can go in and out if you want to take a break, hit Harvard Square, or whatever. I used to do that when it was at City Hall Plaza and steps away from Faneuil Hall, but have basically stayed all day at Harvard.

Getting to Boston Calling from Wellesley is an easy drive but parking is pricey or hard to find, though easier on Sunday when the meters are off. The commuter rail at Boston Landing is only about a mile away from the concert venue, but given the inconvenient schedule and infrequent service you might find yourself having to cut out early to catch the last train (the last concert usually ends between 10:30 and 11pm, and the last train back to Wellesley is usually a bit before 11pm. One option would be to take the train in and then Uber or Lyft back or get someone to pick you up (I’ve done the latter). 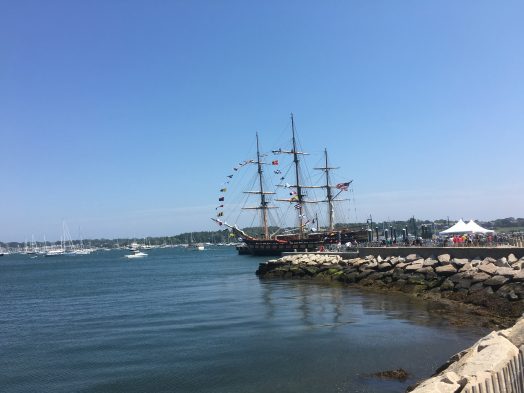 An amazingly beautiful setting for a festival against the backdrop of an old fort and a sailboat-filled ocean on nice days. Don’t be fooled by the word “folk” in the festival name, as the event an stray quite a bit from traditional folk music (e.g., rapper Noname is among this year’s performers).

This show regularly sells out well in advance, though Newport has a system in place to allow fans to resell their tickets without gouging buyers.

While the event is crowded, it has numerous stages to distribute the masses across. This is a family-friendly event, with many groups camping out on blankets (kids under 3 are free, and there are kids’ tickets that go for less than regular ones). The stages are both indoors and outdoors, with some big acts and some intimate performances. You can bring in a small cooler, just no booze or glass.

This year’s big names include Kacey Musgraves, Jeff Tweedy of Wilco, Phish’s Trey Anastasio, and Sheryl Crow. Newport does a rolling line-up announcement, which can be both exciting and frustrating for those figuring out whether they really want to go. Among the acts I recommend are Lucy Dacus, Adia Victoria and Phosphorescent.

One fun thing about Newport is that performers do tend to join forces on stage, giving you a unique musical experience. The last time I went, for example, the Violent Femmes performed, and an earlier excellent performer named Matthew Logan Vasquez joined them on stage with his guitar.

Getting to Newport from Wellesley can be done in a day, but it’s way more relaxing if you can stay over. Mid-July in Newport is obviously peak season, but accommodations can be head, even if you have to go a bit off the beaten path (we’ve stayed nearby in Middletown).

I personally haven’t attended the Newport Jazz Festival, but that’s another option for you if that’s more in line with your musical tastes. It runs Aug. 2-4. 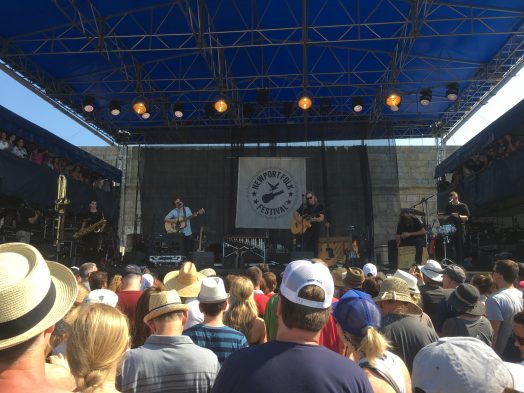 The Levitate event, which I have not attended, has a surf, skateboard and chill vibe. Big names include the Tedeschi Trucks Band, Nathanial Rateliff and Damian Marley. Shovels & Rope and St. Paul & the Broken Bones are acts I’ve seen and recommend checking out.

Single-day ticket prices are in the $90-$100 range with fees, with $20-$30 tickets for kids. This is a family friendly event with kids activities included.

In keeping with the surfy, skatey vibe, camping nearby is one option for hanging out at this event for more than a day.

Paint ball, “the world’s largest bouncy house” and go-karts will be mixed with 3 stages of music. What could go wrong?

Single-day prices start at $100 and include parking, so no gouging on the parking front.

If you’re looking for something more relaxed and less expensive, porchfests are a great take for the whole family or a group of friends. A mix of the talented and untalented grace you with their musical acts, all from the front porches of houses, as well as in yards, in front of stores, and on church steps, among other places. If you’re lucky, you might be offered lemonade, cookies or even an adult beverage.

Some porchfests are more sophisticated than others in terms of helping you navigate them. Some have apps, but at the very least you should be able to find a map to help you figure out where to go and when.

We’ve been the Arlington and Brookline (via the green line) porchfests in recent years and have listened to a wide variety of music from teen rock to show tunes to folk and garage rock.