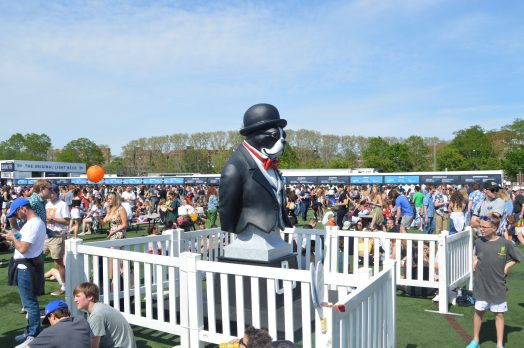 Twenty-One Pilots’ lead vocalist Tyler Joseph came right out on Friday night, the Boston Calling music festival‘s launch day this past weekend, to essentially apologize for being a headliner (“Some may ask why they’re headlining… but we’d like to try to earn it.”). Apparently he was aware of the rumblings coming into this year’s festival that his band was not worthy of the honor even though their appearance a few years back was memorable for its crowdsurfing drum set.

A big crowd still stuck around and sang along on Heathens and Stressed Out during Twenty-One Pilots’ fire-themed show. Even bigger ones did so for Tame Impala’s woozy, psychedelic nighttime show on Saturday and rapper Travis Scott’s grand finale on Sunday thanks to the weather getting progressively nicer as the weekend went along. 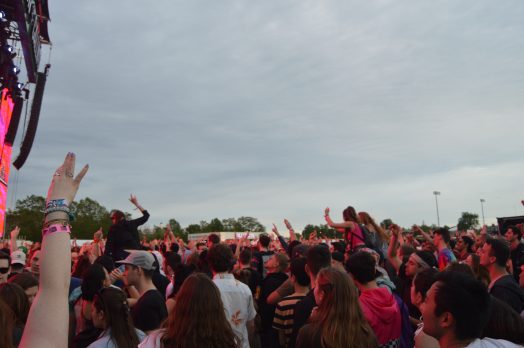 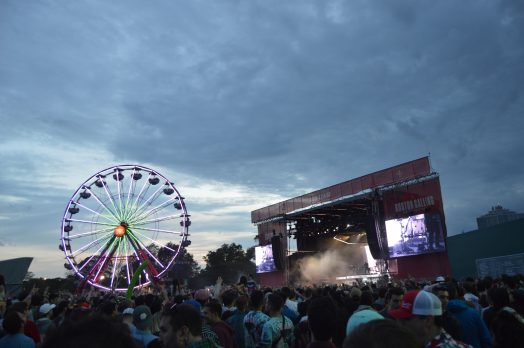 As for me, I spent more time checking out the undercard. This boasted lesser known bands that need to squeeze their songs into shorter time slots earlier in the day. The best part is that it’s a lot easier to get up close to the performers, all of whom are separated from the crowd by a photography and security pit. While many of my friends are more into the classic artists who tend to visit Fenway Park in summer, I prefer newer music and always enjoy hearing a bunch at Boston Calling. Overall, I caught 28 musical performances, some for just a song or two, others for full sets.

Adia Victoria, who kicked off the event Friday afternoon with her gothic songs and spirited guitar play, put on one of my favorite performances. She said her mother asks why she sings so much about the Devil, to which Adia replied: “Because he talks to me so much.”

Skeggs, a surfy garage band from Australia, kicked off Sunday’s program, and the band members could be seen strolling the grounds throughout the rest of the day. I spoke with young fans of theirs who told me they came all the way from California to catch Skeggs and the rest of the festival. Shortly after I ran into a few Wellesley kids, awaiting the hip-hop artists. 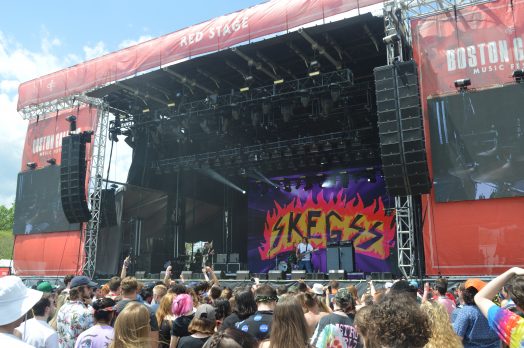 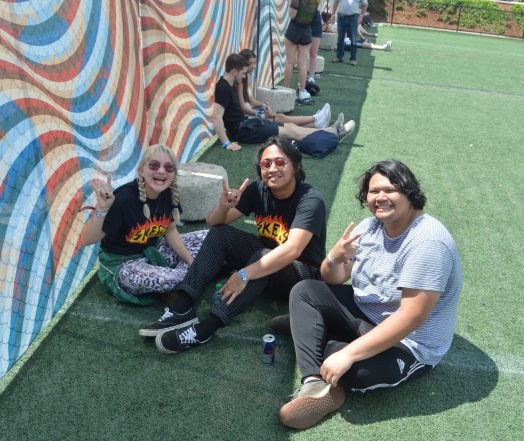 Snail Mail took that same blue stage a bit later, and it felt like the most unrehearsed (in a good way) performance of the festival, especially when lead singer-guitarist Lindsey Jordan played solo. Snail Mail performed against the unsubtle backdrop of a giant gooey snail video, while Jordan poked fun at her habit of frequently tuning her instruments. She referred to an old tweet about how at Snail Mail shows the band tunes its gear for most of the show and plays about 2 songs. “You get what you pay for,” she said.

Saturday’s highlights included back-to-back performances from Mitski and Big Red Machine, which combines Bon Iver’s Justin Vernon and The National’s Aaron Dessner, who has long had a hand in curating Boston Calling’s line-up.

Mitski has changed her act a lot since her Boston Calling debut in 2017 when she played on a smaller stage, made sparse eye contact with the crowd, and cranked a bass guitar. This time around, as she’s been doing on tour behind her poppier newish album Be the Cowboy, she sang new and old songs while doing a measured performance art routine involving a white chair and table. She told those who had never heard of her that, after she played her most radio-friendly song (Nobody), “This is the hype…You can shuffle out now.” She also expressed her desire for the audience to be closer to the stage, something that is allowed at bigger music festivals like Firefly in Delaware that have a wider variety of stages.

Big Red Machine, which has only played a handful of shows, was a nice coup for Boston Calling, pulling in both fans of Bon Iver and The National. Vernon did most of the crooning and wailing, while Dessner focused on his signature guitar playing. The band also invited two Berklee School of Music students to add brass accompaniment to a couple of songs — a great local nod and the sort of surprise I wish would be incorporated into more festival acts. This band only has one album’s worth of music, and who knows if there will be a follow-up, but Dessner still had confidence that the crowd would be able to sing along with at least one tune.

Tank & the Bangas, a New Orleans ensemble, is also hard to describe but fun to listen to. The colorfully dressed group mixed funk, hip-hop, and a little bit of everything else into a danceable pre-dusk sound on Friday.

The biggest sort-of-surprise of the festival came took place on Saturday when Little Nas X, he of the viral country-rap song and meme magnet Old Town Road, made the ultimate cameo appearance. Boston Calling announced in advance that he’d be at the festival, but didn’t say exactly when. He trotted onto the colorful stage during Anderson .Paak & the Free Nationals’ spectacular set to sing his hit, to the most raucous cheering I heard at the event. Fortunately for .Paak, his is one of those acts that has a good shot at wowing you live regardless of whether you enjoy his recordings, and he and his fellow musicians made sure not to be upstaged.

The show’s biggest controversy, if that’s not too strong a word, involved the simultaneous scheduling of electronic outfit Odesza and Irish crooner Hozier. I split the difference and caught both. Odesza, which opened with six drummers across the stage, had the crowd dancing despite many tired legs. Hozier’s fans took to berms and bleachers to chill while taking in his nighttime set, which ended with a singalong version of Take Me to Church (“You’ve proved you’ve got the pipes Boston….now show me again!”).

While Boston Calling caters to late-teen-to-thirty-somethings, plenty of older folks made their way to Cambridge, too. This was especially true on Friday for neo-classic rockers Greta Van Fleet, which might have won the merch sales title, and on Sunday for Brandi Carlile’s set. Very different crowds criss-crossed on Sunday to see Carlile on the Blue Stage and rapper Sheck Wes on the Green one.

Aside from the music, Boston Calling served up a great mix of food and beverages, though I didn’t venture past Tasty Burgers for my meals. The event has settled into a smooth operation logistics-wise.

Many were also thankful for the timing on Sunday of SNL comedians Melissa Villaseñor and Michael Che, who did late afternoon stand-up acts inside Harvard’s hockey arena (was weird seeing Che, the SNL Weekend Update co-anchor, standing). That indoor respite helped to stave off dehydration and give fans a second wind before Logic, Brandi Carlile and Travis Scott wrapped up the weekend.

MORE: Wellesley woman has all the angles at Boston Calling