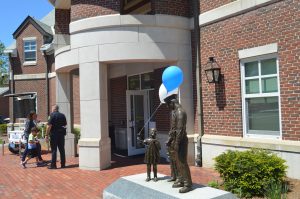 On May 17, 2019 at 2:21 a.m. Officer DeBernardi was assisting another officer on a motor vehicle stop when he conducted a random query of a Chrysler sedan’s registration which showed that the registered owner’s license was suspended.  He stopped the vehicle and spoke with the operator and owner.   He was aware that his license was suspended.  He was taken into custody, transported to the station, booked in the usual manner, afforded all rights and held on $300 bail.

On May 13, 2019 at 1:30 p.m. Officer Dennehy spoke to a female reporting party about a wallet she lost.  She believed the wallet was left in an Uber and was lost somewhere between Boston and Brookline.  She wanted to notify the police department in case any of her credit cards in her wallet were used fraudulently.

On May 14, 2019 at 3:52 p.m. Officer J. Popovski was dispatched to Washington Street at Cliff Road for an altercation on a school bus between two students.  The argument began over a social media account.  One student became agitated by another student viewing their social media account on the bus and began yelling things at the other student and striking the student.  The incident will be investigated and handled by the school department.

On May 13, 2019 at 7:04 p.m. Detective McLaughlin spoke to a female reporting party about an attempted fraud scheme where she was offered money to take a survey.  The reporting party received a check for an amount larger than the payment for the survey and was asked to return the excess funds.  She believes it is a scam.  The report is incomplete at this time and no further information is available.

IT WOULD BE A CRIME NOT TO SUPPORT SWELLESLEY: Here’s how to Advertise and/or Donate to support our independent journalism venture

On May 14, 2019 at 10:00 a.m. Officer Shore was working a construction detail on Washington Street near Weston Road when he observed a Volkswagen strike another vehicle and continue driving.  Officer Shore notified Officer Wagner who was on patrol in the area.  Officer Wagner located the vehicle and stopped it.  He spoke with the operator who was aware that she had struck the other vehicle but stated she didn’t know what to do so she kept driving.  The operator will be summonsed to Dedham District Court for Leaving the Scene of a Property Damage Accident.

On May 15, 2019 at 8:07 p.m. several officers were dispatched to a business on Worcester Street for a possible breaking and entering into the building.  Officers noticed that one of the office suites had damage to the door and appeared that someone may have forced entry into the office.  Officers checked the office and did not notice anything out of place.  On May 16th employees from the business that was broken into came to the police station to speak with Officer Popovski and

provided him with video footage and photos of the individual believed to have broken into the building.  Officer Popovski forwarded the information to Det. D’Innocenzo who returned to the business and spoke with employees.  Det. D’Innocenzo learned that the male party forced entry into offices and took 8 laptop computers from one office suite.  The incident is under investigation.

On May 16, 2019 at 11:07 a.m. Officer Kane spoke with a female party who stated that she had provided an unknown male party who had contacted her regarding a security subscription for her computer her personal information.  She has a computer subscription through Apple that expires in July and she thought this is what the male caller was contacting her about.  She was able to contact her bank prior to any withdrawals being made.   Officer Kane advised her to closely monitor her credit and to request added security to her accounts.   There are no suspects at this time.

On May 17, 2019 at 12:33 a.m. officers were dispatched to the area of Cedar Street and Bethel Road for a report of an altercation between two males.  Officers located the males and learned there was a verbal argument that escalated to a physical altercation.  Neither party wished to file charges.

On May 18, 2019 at 10:56 p.m. Officer Griffin was on patrol when he observed a vehicle parked in the rear of the parking lot at the Hunnewell Tennis Courts with its headlights off and interior light on.  He approached the vehicle and observed a male and female party in the vehicle rolling a marijuana cigarette.  He spoke with the two parties who are high school students in Needham.  They admitted to smoking and possessing marijuana.  Officer Griffin had them contact their parents who came to the tennis courts and transported them home.  Both were issued Wellesley Town By-Law violations for possessing an open container of marijuana in a motor vehicle.

On May 19, 2019 at 7:35 a.m. Officer Rosenberg was dispatched to the area of Woodside Road for a report of vandalism to a mailbox.  The female reporting party stated that her mailbox was damaged overnight and appeared to have been struck by a blunt object.  Another family member believed they may have heard some youths in the area overnight.  There were no other mailboxes in the area that were damaged.  No suspects at this time.

On May 19, 2019 at 7:58 a.m. Officer Rosenberg spoke with a female party from Washington Street who stated that overnight two of her tires were stolen from her vehicle.  Officer Rosenberg observed that the front and rear driver’s side tires were removed and the vehicle was resting on cement blocks.  There are no suspects at this time.