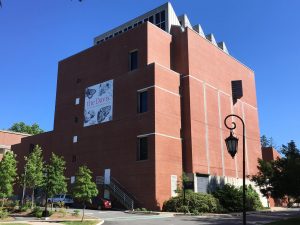 The Davis Museum at Wellesley College will host its fourth annual outdoor film series. Movies exploring the theme of futuristic technology anticipate the Davis’ upcoming fall exhibition Fatimah Tuggar: Home Horizons. Join us for exclusive gallery tours and art activities at 7pm. Screenings start at dusk, and films will be projected on the outside of the Davis Museum building. Free snacks and beer (21+)! Free admission and parking. Bring you own folding chairs and blankets. Rain location is Collins Cinema.

Thursday, June 27: A Wrinkle in Time

Meg Murry and her little brother, Charles Wallace, have been without their scientist father, Mr. Murry, for five years, ever since he discovered a new planet and used the concept known as a tesseract to travel there. Joined by Meg’s classmate Calvin O’Keefe and guided by the three mysterious astral travelers known as Mrs. Whatsit, Mrs. Who and Mrs. Which, the children brave a dangerous journey to a planet that possesses all of the evil in the universe.

Thursday, July 11: Back to the Future

In this 1980s sci-fi classic, small-town California teen Marty McFly (Michael J. Fox) is thrown back into the ’50s when an experiment by his eccentric scientist friend Doc Brown (Christopher Lloyd) goes awry. Traveling through time in a modified DeLorean car, Marty encounters young versions of his parents (Crispin Glover, Lea Thompson), and must make sure that they fall in love or he’ll cease to exist. Even more dauntingly, Marty has to return to his own time and save the life of Doc Brown.

WALL-E, short for Waste Allocation Load Lifter Earth-class, is the last robot left on Earth. He spends his days tidying up the planet, one piece of garbage at a time. But during 700 years, WALL-E has developed a personality, and he’s more than a little lonely. Then he spots EVE (Elissa Knight), a sleek and shapely probe sent back to Earth on a scanning mission. Smitten WALL-E embarks on his greatest adventure yet when he follows EVE across the galaxy.

In the 23rd century, a New York City cabbie, Korben Dallas (Bruce Willis), finds the fate of the world in his hands when Leeloo (Milla Jovovich) falls into his cab. As the embodiment of the fifth element, Leeloo needs to combine with the other four to keep the approaching Great Evil from destroying the world. Together with Father Vito Cornelius (Ian Holm) and zany broadcaster Ruby Rhod (Chris Tucker), Dallas must race against time and the wicked industrialist Zorg (Gary Oldman) to save humanity.

ABOUT THE DAVIS MUSEUM

One of the oldest and most acclaimed academic fine arts museums in the United States, the Davis Museum is a vital force in the intellectual, pedagogical and social life of Wellesley College.  It seeks to create an environment that encourages visual literacy, inspires new ideas, and fosters involvement with the arts both within the College and the larger community.

ABOUT WELLESLEY COLLEGE AND THE ARTS

The Wellesley College arts curriculum and the highly acclaimed Davis Museum are integral components of the College’s liberal arts education. Departments and programs from across the campus enliven the community with world-class programming– classical and popular music, visual arts, theatre, dance, author readings, symposia, and lectures by some of today’s leading artists and creative thinkers–most of which are free and open to the public.

Since 1875, Wellesley College has been a leader in providing an excellent liberal arts education for women who will make a difference in the world. Its 500-acre campus near Boston is home to some 2,400 undergraduate students from 49 states and 58 countries.