What would a Wellesley High School sports awards evening be without a bunch of stats?

WHS Athletic Director John Brown wowed the crowd of student-athletes, family members and coaches with the fact that 196 seniors took part in sports, 80% of whom were 3-season athletes.  It took 134 coaches to orchestrate, motivate and teach the students.

The seniors pulled off more than 60 league championships during their time at WHS. Wellesley High has had the state’s top winning percentage in 4 of the past 5 years, and this past year has celebrated state championships in sports such as lacrosse, cross country, track and ice hockey.

But just so you don’t think this was an endless stream of numbers, the evening also included a lot of hugs (I didn’t quite keep a tally on those), inspirational words and a very bright red jacket worn by Mr. Brown. “For him to plug in that jacket, that’s Raider Pride,” quipped girls’ basketball coach Glen Magpiong, who did a stellar job reading off all of the athletes’ names.

The athletic director also announced that Wellesley had been awarded the state’s sportsmanship award.

Each athlete received a plaque for their efforts, and a few dozen more were awarded individual team or other prizes and scholarships.

Personally, we were proud to see our son recognized as being among the relatively few students who participated in WHS sports all 12 seasons. What’s more, seeing kids I personally coached or watched grow up through sports over the years, did indeed make me feel Raider Pride. 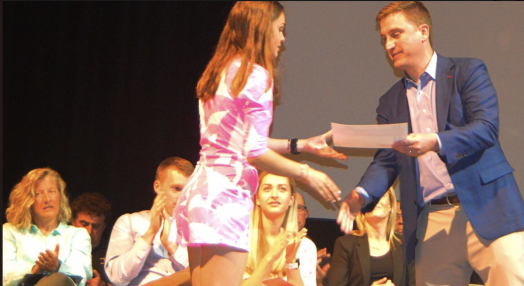