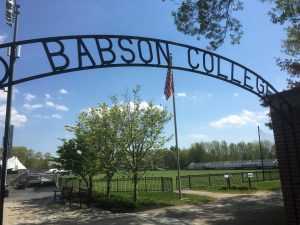 It seems like only yesterday that Commonwealth Shakespeare Company (CSC) came to Babson College in a partnership designed to sync up the arts with the entrepreneurship education programs at the 4-year private business school. As the college’s resident theater company since 2013, the nonprofit CSC devoted significant resources to Babson’s arts and academic programs. The idea was bolster the College’s efforts to enhance the natural synergies between entrepreneurship and the arts. Steven Maler served as director of Babson’s Sorenson Center for the Arts. The start of the partnership coincided with the naming of new Babson President Kerry Healey in 2013, who at the time had been on CSC’s board for five years. The end of the partnership coincides with Healey’s recent departure from Babson.

The two groups reassessed their partnership from time to time. Back in 2016 Babson and CSC extended their work relationship for three more years, and CSC continued to serve as the school’s resident theater company. Which takes us to 2019, and the recent announcement according to the Boston Globe that as of January 2020, Babson will no longer have CSC around to ensure that the arts and business continue to co-mingle and benefit from one another there. Babson will, however, put up big sponsorship bucks for one more summer of free Shakespeare on the Boston Commons. Mark your calendars for The Tempest, summer 2020.

On a personal note

We’ve greatly appreciated CSC’s cultural additions to Wellesley, and have had the good fortune to attend many performances over the years. Our favorites: Birdy and the athleticism of lead actor Spencer Hamp and the steampunk stage sets; when the 5-time Grammy award-winning jazz collective Maria Schneider Orchestra played to a sold-out house of knowledgeable and appreciative audience members; the tragic history lesson of Our American Hamlet; the time actor Seth Gilliam, who played Father Gabriel on Walking Dead, was in the house; and the magical and contemporary Romeo & Juliet on the Boston Commons.

Thanks for bringing amazing theater and music to Wellesley, Commonwealth Shakespeare Company. “If we do meet again, why, we shall smile; If not, why then, this parting was well made.” — Julius Caesar.