When we last tuned in to the Wellesley 40B real estate development drama, the projects proposed on Stearns Road, Delanson Circle and Weston Road appeared to be moving ahead, albeit not exactly as developers had envisioned. Not that asking for the universe and settling for the moon isn’t standard practice.

The one 40B project that has actually begun to head toward reality is the 44-unit Fieldstone Way condo complex that’s being built on 12 acres of land on Great Plain Avenue near the dump.

Developer Northland Residential (“Recognized for our dedication to the environment, Northland Residential Corporation is a privately owned company which has become one of New England’s premier developers of extraordinary real estate….”) hasn’t responded to our inquiries, so we’ve been unable to get details on their latest plans. But the first real physical evidence of the project moving forward grabbed residents’ attention this week.

Countless trees have been removed, transforming what was previously heavily forested property into what the developers intend to be a haven for empty nesters and others (nests were certainly emptied during this process). A truckload of the fallen trees even made a very special guest appearance at the Climate Strike rally at Wellesley Town Hall on Friday. 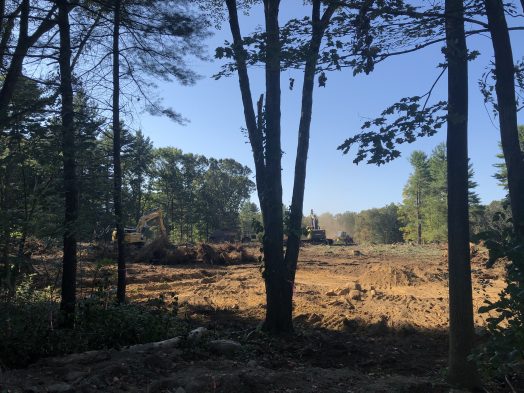 That project’s progress should give hope to developers whose proposals are still making their way through the town’s gauntlet of approvals. Developers who file for 40B projects can gain leeway on zoning rules in exchange for dedicating a portion of units as relatively affordable. Wellesley has been working to up its affordable housing stock to 10% overall, and that would enable it to avoid thwart proposals for developments it deems as inappropriate.

Upcoming Zoning Board of Appeals meetings will address the following projects: