Update (10/22/19): According to the Wellesley Police Department, the cyclist was transported to Newton-Wellesley Hospital for evaluation and came to the police station a few hours later to retrieve his bike. The cyclist was traveling west on Central Street and a Jeep SUV was turning left from Central Street east onto the Weston Road bridge.  The cyclist and Jeep collided.  The operator of the motor vehicle was issued a citation for failure to yield.

Saturday morning got off to a scary start in Wellesley when a cyclist was hit by a car at the intersection of Weston Road and Central Street. Fire Engine 1 from across the street was the first to respond, according to a Swellesley source who happened to be nearby.

(Mrs. Swellesley and other drivers were detoured by police in the aftermath of the incident, and I happened to be a couple of miles down the road in Wellesley Hills when I saw an ambulance whiz by, presumably wth the cyclist in it.)

We don’t have further details, but will update this post if we learn more. 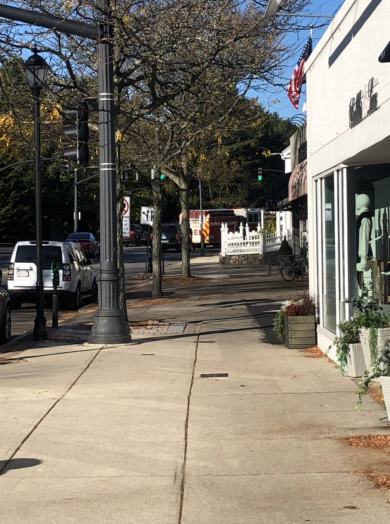