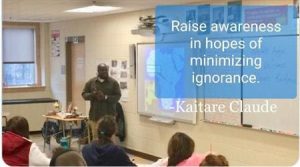 The Wellesley Rotary Club and World of Wellesley will present speaker Claude Kaitare on Tuesday, November 5, 6:30pm – 8pm, at the Wellesley Free Library. All are welcome for light refreshments beginning at 6:30pm. The speaker will start at 7pm. Register here.

Claude Kaitare was born in the early 80s in Rwanda. He spent his childhood primarily in Kigali until the Rwandan president was assassinated on April 6th, 1994. This provided the catalyst for what is known as the genocide against Tutsi.

Claude’s began an odyssey that separated him from his immediate family in an orphanage and led him to live with other family members in Portland Maine. There he attended school went on to graduate in 2005 from Clark University in Worcester with a bachelor’s degree in History. In January, he completed a graduate-level Holocaust and Genocide Studies certificate program at Salem State University. Claude has travelled extensively through Eastern Europe and most recently visited Rwanda with Salem State University in 2015, 16 and 17.

Claude continues to testify about the tragedies that he witnessed in the genocide to different high schools and universities in collaboration with Facing History and Ourselves for whom he has been a resource speaker since the early 2000s. He aims to educate others on genocide and war crimes since unfortunately history does repeat itself. His objective is to continue raising awareness in hope of minimizing ignorance about the human catastrophe of genocide.