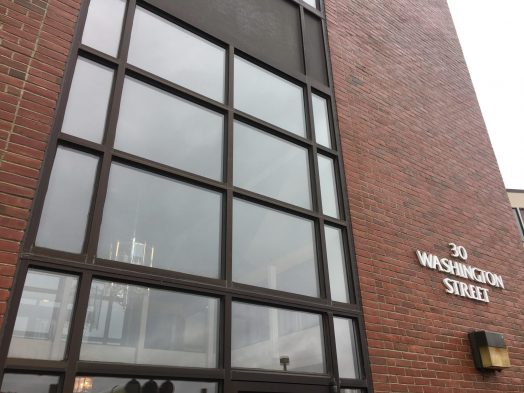 A year ago we broke a story about a business called The Coleman Institute that planned to open an opioids and broader addiction treatment center in Wellesley lower falls, not far from a couple of schools. The next thing you knew, concerned parents were mobilizing and the town held a tense and jam-packed public forum at which Coleman officials spoke and answered questions through the Board of Selectmen.

We’ve poked around from time to time since, keeping an eye on Coleman’s website, social media, and the office at 30 Washington St. itself. The third-floor office appears to be set up, but we have had no indication it’s open for business. Perhaps Coleman has taken more of a “soft opening ” approach to stay under the radar. We’ve not heard a proactive peep from the town or business.

A Coleman spokeswoman told us a year ago in no uncertain terms that “As was indicated at the end of the community meeting on October 22nd, all communication and sharing of information will come through the Selectmen’s Office announcements from this point forward. Any developments or new information can be sourced there.”

But we figured a year later would be a reasonable time to check in with Coleman since we had heard nothing from the town. We had assumed the business must be open by now and wondered how the location has worked out for those seeking substance abuse help. Has the business really been as unobtrusive as its officials suggested it would be?

All quiet on the Coleman front

We reached out to Wellesley Communications Manager Stephanie Hawkinson for an update, but she didn’t have much for us. “As far as we know, there is nothing to announce. We haven’t heard anything from them or from the residents who were concerned. If they have opened, I’m sure any precautions worked out with public safety officials are in place and the office is operating quietly just like any other physicians office.”

As of Nov. 12, the Coleman website is still promising that the Wellesley office is “coming soon,” as it has for months (though to be fair, Coleman is by far not the first business in town to stretch the meaning of “soon”). The office, to be operated by Coleman rather than as a franchise like most of its outposts, was originally supposed open about a year ago.

We reached out to Coleman’s marketing contact, but didn’t hear back. So we tried Coleman’s leader, Peter Coleman, as well as the company’s COO, and Wellesley office executive director. We even tried Coleman’s low-key Twitter and Facebook pages. No replies. The Wellesley office’s medical director and executive director have Coleman listed as their current employer, leading us to believe Coleman still plans to open here.

We also reached out to parents who had contacted us a year ago, and they’ve said that they’ve heard nothing either. We reached out to property manager Haynes Management, but have not heard back.

The only real response we did get was when we called the phone number on the Wellesley office page. The man answering confirmed that no, we don’t have an office open in the Boston area yet. New Jersey is the closest.