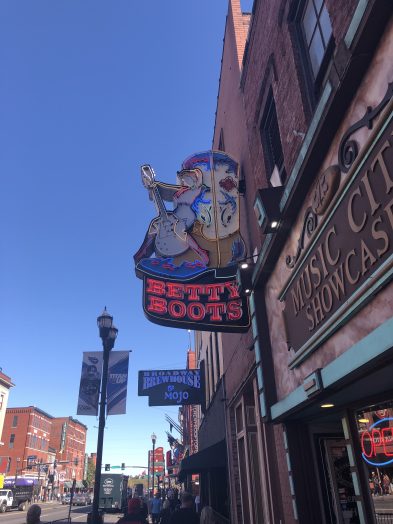 You won’t find 2 more different places than Wellesley and Nashville. And that, of course, is the beauty of what people from either place will find visiting the other.

Nashville has so much to offer that you just don’t come across in Wellesley:

On and under the surface, Nashville is more suited to grown-up visitors than families, though granted, we didn’t seek out activities such as the acclaimed zoo. We also traveled without renting a car, so confined our excursions to those within a reasonable walk, run or ride-share.

I should mention that neither Mr. nor Mrs. Swellesley is much of a country music fan. We recognized some names and songs, but weren’t bowing at Music City’s altars like some visitors. We descended upon Nashville to attend a late-October journalism conference called the LION Publishers Summit, and take in the sights while there.

We started off strong, taking a quick look at daytime Broadway after checking in to our hotel, which had a guitar-shaped pool we regrettably never used. Guitars are everywhere in Nashville, and southern charm and manners were alive and well, too. We made a concentrated effort to be friendly, and more or less succeeded.

We grabbed lunch at Acme Feed & Seed, which boasts a steady stream of customers and juicy brisket sandwiches. We ate on the rooftop bar, which

featured a nice view of the Cumberland River and the city at large. One nice find was Acme Radio Live, which has its studio in the restaurant building and provided background music for us whenever we went back to the hotel. 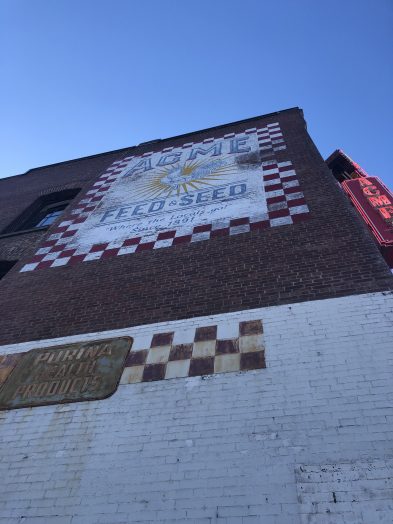 We next popped into the Johnny Cash Museum. Touristy yes, and we had low expectations for our $20 entry fee, but were pleasantly surprised at the organization and solid collection of memorabilia. This included displays on Cash’s prison reform efforts, his acting career and remnants from Johnny Cash and June Carter Cash’s lakeside home.  We passed on the Patsy Cline museum, which was upstairs, not wanting to overdo it. 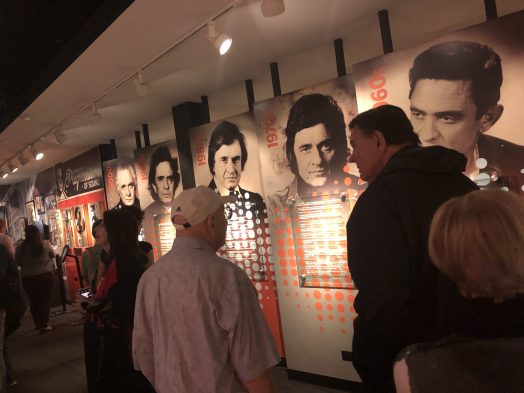 At night, we hit the Grand Ole Opry, which is now adjacent to a mall where an amusement park once stood. Tickets on a Wednesday night were easy to get (about $50 apiece), and from our balcony seats on the left side we had a fine view in this beautiful venue with a pitch-perfect sounds system. The Grand Ole Opry is throwback entertainment that works well for the modern short-attention-span crowd. It’s a variety show, and included a hokey warm-up act of singing and joking cowboys, followed by a series of talented singers, including a couple performers making their Opry debuts. In between sets, announcer Bill Cody read pitches, shared background on performers or history tidbits, and read notes about audience members (including The Swellesley Report). Grammy Award winners Little Big Town closed out the night with an energetic show. We pre-gamed at the Bavarian Bierhaus, which featured tasty brats and a punk polka band that assaulted patrons’ ears with their take on Beastie Boys and other music.

We spent the next couple of days at the conference at the expansive Music City Center. Offsite activities included a reception downstairs at the speakeasy section of FGL House and an on-our-own lunch at a 6-story Nashville Diner.

I ran the streets of Nashville most mornings to explore further. This included the statehouse, obligatory Andrew Jackson statue, and other state buildings. Another run took me through the greenery-and-brick of Vanderbilt University as well as Centennial Park (which community doesn’t have one?) and its remake of the Parthenon.

Once the conference wrapped we became tourists again. This included a rainy day stop to the Country Music Hall of Fame & Museum (costs about $20 if you don’t go in for all the “experiences”). The museum, which is huge and well laid-out, attracts more than 1 million people a year and it felt like most of them were there the day we went. Maybe the latest Ken Burns documentary on Country Music has sparked additional interest.

Outside, we strolled the tiny Walk of Fame across the street from the museum that honored musicians from Jimi Hendrix to Dolly Parton. Inside, we learned about the roots of this genre, and the likes of the singing brakeman Jimmie Rodgers, and took in displays of more modern artists such as Kacey Musgraves. Mrs. Swellesley even penned lyrics at the Taylor Swift Education Center. A nice surprise was the handout of tickets to see a young songwriter and artist named Josh Kerr, who played solo guitar, sang and answered questions from the crowd, including obligatory ones about how he got his break. We grabbed lunch that day at an historic and recently resurrected Woolworth on 5th, which served up burgers, shaved steak sandwiches, and tasty milkshakes (they’ve also got an extensive bar).

A busy Sunday in Nashville

We went our separate ways for the start of Sunday. Mrs. Swellesley attended services at an old Presbyterian church and then visited Cheekwood Estate & Gardens, which happened to feature a Halloween parade for dogs that day. Mr. Swellesley couldn’t resist attending the Tennessee Titans football game, since the stadium was literally across the street from our hotel and seats were available for a quarter of the price of Pats tickets. The Titans pulled off a win thanks in large part to their ex-Patriots players such as Logan Ryan and Malcolm Butler (and I sat next to a Tennessee native who went to high school with Red Sox outfielder Mookie Betts down there).

We also scouted for a place to watch the Patriots play the Cleveland Browns and found our New England oasis at a place called Live Oak in the happening Gulch area of Nashville. The place was a scene. By game time, relaxed Tennessee drawls were gone, replaced with the staccato cadences of fast-talking east coasters. Sharp dressers were everywhere, some sporting Tom Brady gear, others with Julian Edelman attire. Nobody bade us “good afternoon” or called Mrs. Swellesley “ma’m” or Mr. Swellesley “sir.” We had found our people. The decor can only be described as tasteful and refined. Replicas of the Patriots Super Bowl banners greeted us, and signs behind the bar warned the unsuspecting that all TVs would be turned over to the Pats’ game at 3pm CST.

We wound up our trip looking for dinner, venturing just off the main strip onto side streets such as the Printer’s Alley area. While we didn’t exactly know what we were looking for we somehow found it in Tazza, possibly the only restaurant in Nashville with no liquor license and no music. Our waiter greeted us, looking as worn out as we felt. We shuffled behind him to a dark booth at the far end of the place. It was us and one other couple, their heads bowed in prayer over their meal. We listened in. This was no hastily mumbled grace. The gentleman spoke loud and clear, reminding us that we did, indeed, have much to be grateful for. A couple blocks down the street, a straggly park served as a gathering spot for dozens of Nashville’s homeless and addicted. Like Boston, Nashville has its share of problems. As a tourist, the city felt as safe as Boston, and its problems felt as familiar. We navigated the streets without problems, the inevitable panhandlers accepting with good grace our head shakes to their requests for change. The city recently received a $3.5 million grant to address youth and young adult homelessness, as well as $3.5 million in federal funding to help Nashville reduce the number of people who sleep in shelters, on the streets or in encampments.

Support Swellesley: Here’s how to Advertise and/or Contribute to support our independent journalism venture