The deep WHS team, which got big contributions all season from students in 9-12 grade, had a strong start at Sunday’s meet at MIT. The Raiders finished second in the 200-yard medley relay, and then placed a handful of swimmers in the top 10 in the 200 freestyle. Freshman Naomi Boegholm won an individual state title in the 200 individual medley, and other standout performances included senior Nellie Thompson taking second place in the 50 and 100 freestyle races, and Iris Xia finishing second in the 100-yard breaststroke. 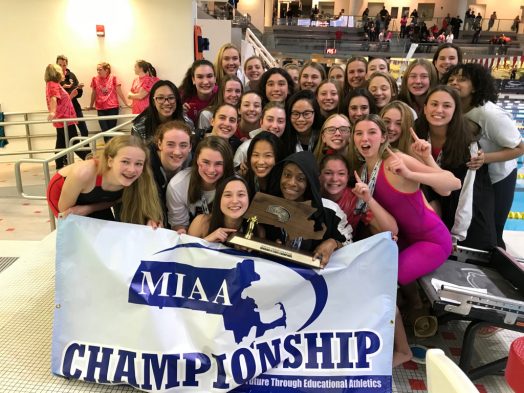 Separately, Wellesley High’s boys and girls cross country teams continued their excellence this weekend at state championship meets in Gardner, where they both finished as state runners-up on the strength of team balance.

The boys narrowly fell to St. John’s Prep, with Jason Norris leading the way for the Raiders with a 7th place overall finish on the 5K course in 16.29. The Raiders also finished second a year ago on a snowy course.

More sports: We’re exploring ways to boost our coverage of Wellesley sports during the winter season, but we need your help. If you’re a team manager, coach, player or parent, please reach out to us at theswellesleyreport@gmail.com if you’d like to assist.