At a public meeting on Dec. 16 at the Warren Recreation Building, engineering and environmental services firm Weston & Sampson (W & S) put forward ideas about potential changes at Morses Pond (MOPO). W & S was hired by the Wellesley Recreation Department last year to put together an $80k feasibility and design study for the 5-acre town-owned MOPO area. The study is partly funded by Community Preservation funds.

Approximately 30 people in all attended the meeting — residents numbered about 20; and Weston & Sampson representatives, Town employees, and a couple media types made up the rest.

W & S representatives put forward a power point presentation that covered early ideas and concepts, followed by a request for feedback about likes, dislikes, what they might be missing.

Based on resident comments from meeting, and from an earlier meeting that took place last summer, Weston & Sampson will complete the feasibility study by late Fall 2020.

A major recommendation was to  tear down the bathhouse because according to W & S rep Tim Sheehan, “The existing bath house has lived its life and it’s probably time for that life to be over.” In the firm’s vision, the bath house would be reoriented to the opposite side of the beach, toward the end of the service road. The reason for the flip of the bath house to the other side of the beach area is to stop blocking the views with equipment and buildings, thereby opening up sight lines across the beach area.

A new bath house would be kept simple; constructed as a zero net energy building; and include improved staff and storage areas. The bath house would actually be two buildings, with a total square footage increase of about 200 square feet over the existing bath house. The structures would be low lying to blend in with the landscape and would be powered by electricity. There would be patio areas with seating and shade. One resident asked if the shaded part might with some minor tweaks be substantially increased, which would be a benefit to visitors seeking relief from the late afternoon sun that beats down on the MOPO beach.

One resident voiced concerns about the close proximity of the proposed bath house to the MBTA commuter rail tracks and asked if there might be some fencing installed to keep the area safer.

Although the grade is extremely steep and it would take a very determined kid to get up to the tracks, the point was taken that moving the bath house to the MBTA tracks side of the pond does bring children and families closer to fast-moving vehicles.

Plans call for enhanced accessibility across the recreation site, which is being looked at from an Americans With Disabilities Act (ADA) perspective.

Back at the August 2019 meeting, recreational options for Ice House Pond came up. One resident asked the Town and S & W to consider how difficult it would be for caregivers to keep an eye out on kids at both Ice House Pond and Morses Pond should Ice House Pond are be made as attractive to kids as the MOPO area.

At the December meeting, S & W reps came back with an Ice House Pond plan that would include a boardwalk with viewing platforms around Ice House Pond that would allow residents to walk the perimeter of the pond, fish from the boardwalk, and observe nature. Invasive species such as bittersweet would be removed from the area.

Also discussed was possibly lowering the culvert between the two ponds to increase flow between the two bodies of water. As it stands now, Ice House Pond’s water level in the summer months gets very low, and the pond becomes choked with plant life.

One resident expressed concerns about a boardwalk: “A boardwalk to me isn’t compatible with a natural place.”

One resident asked if parking could be relocated closer to the beach area. That one got a hard no. In fact, the parking would be slightly farther away from the pond.

During the August 2019 meeting, DPW Water & Sewer Superintendent Bill Shaughnessy pointed out that the current parking area is on the edge of a Zone 1 wellhead protection area. To provide some buffer between the lot and the protection area, the parking lot would be moved further east. This would mean a slightly further walk to the pond, an idea that disappointed some audience members who were actually hoping for a shorter walk to the pond. 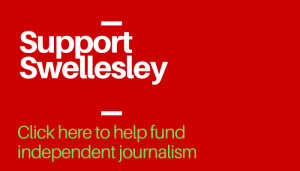 There’s still a long way to go before any decisions are finalized. There will be additional public meetings, and capital funding must would have to be ok’d by Town Meeting. The project, which does not yet have a cost estimate, could be three or four years away from becoming a reality.

Back in August 2019, W & S came to town for a public engagement and listening session.