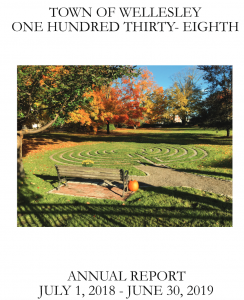 As an online journalist, reading through data that’s already 6 months old is inherently frustrating, but that’s just how these things work. As a town resident, catching up on what has happened over the past fiscal year and coming away with a better understanding of town government is valuable.

1. Money makers: Who doesn’t love looking at a list of public salaries? Surprisingly, Wellesley Public School Superintendent David Lussier, who arguably has the highest profile job in town, was not the top earner this time around at $264K. Though it took unusual circumstances for this to be the case. Former Executive Director Blythe Robinson, who resigned in February 2019, pulled in a little less than $200K for fiscal 2018, but her total skyrocketed to $307K for fiscal 2019—attributed to a contractual obligation.

The other big earners in town are public safety officials, with the top earning cop at $202K, and 17 police officers pulling in $150K by my count. You’ll sometimes hear a yearning for the days when public safety and other town employees could actually afford  to live in Wellesley. That’s still a challenge for those starting out, unless independently wealthy, partnered with someone pulling in big bucks or here through inheritance. But if you stick around in one of those jobs, Wellesley could become more affordable to you than it is for say, journalists. Many officers work private details and overtime in addition to their regular duty hours, and of course they face unpredictable dangers on the job (like one officer who was run over by a suspect’s car last year). During the calendar year of 2019 there were several road construction and utility projects throughout the town which resulted in sometimes as many as 20 or more construction details each day.  These construction details are paid by the private vendors that request them. However, they are tallied as part of the officers’ annual pay. The police department is looking to hire more personnel, which in theory could cut down on the need for overtime.

2. Fishy charges. Here’s a police log item we don’t recall seeing, but that is summarized in the annual report. “July 2018 Wellesley patrol officers initiated an investigation of an employee at Captain Marden’s Seafood after receiving a complaint from a patron that they were double charged for an order. Subsequent investigation led to the identification of the employee and discovery that he was using a personally owned credit card reader to charge customers and deposit their payments into his personal bank account; defrauding Captain Marden’s of their profits. Search warrants were obtained for the suspect’s credit card reader and banking records and it was determined that he stole over $4,500 worth of customer’s payments during his employment at Captain Marden’s.”

3. Health concerns: The Health Department cranks out some of the more intriguing stats. It issued tobacco permits to 11 retailers. It conducted 465 inspections at food establishments, investigated 47 complaints, and suspended permits at 7 restaurants due to “critical violations of the food code.”

4. Teardowns and swimming pools: 45 new single family dwellings were built…replacing 45 homes that were torn down. Ten swimming pool permits were issued, but none for new chimneys or fireplaces.

5. Senior center stats: According to the Council on Aging, an average of 155 individuals/day visit the Tolles Parsons Center on Washington Street (the number is likely higher but sometimes visitors opt not to check in). 2,999 meals were served (really, couldn’t get to 3K?) to 389 different diners. 323 volunteers provided an estimated nearly 8,000 hours of service, which by one calculation is worth a couple hundred thousand dollars.

Time Tracking: I spent more than 3 hours poring through the Wellesley Annual Report so that you didn’t have to, and then another hour or 2 summarizing highlights. If this sort of local journalism is valuable to you, please consider contributing to The Swellesley Report.

6. Pipe cleaner: The town bought a hydro excavation truck. It “uses pressurized water and an industrial strength vacuum to simultaneously excavate and evacuate soil, reducing risks and costs brought about by traditional digging methods for the repair of the water and sewer distribution systems.” Sounds like a smart move.

8. RDF a good neighbor. The Wellesley Recycling & Disposal Facility accepted 1,454 tons of recycled products from neighboring communities and recycling haulers. The gross revenue from the Business Initiative Program in FY19 was $55,529. The cost of doing business was $24,987 for a net benefit of $30,542. The 12-year net benefit to the town is $1M-plus. All revenues generated were deposited into the town’s General Fund.

9. IT heads into the cloud. The town’s IT department went big into cloud computing to allow permit and license applicants to avoid trips to Town Hall. They can now attach supporting documents to their online applications, pay applicable fees by credit card, and track the status of their application in real-time. Wellesley’s Building Department estimates a reduction in foot traffic by at least 50% since the system went live.

10. Schools granted direct link to cops.  A $20,000 grant from the Massachusetts Executive Office of Public Safety and Security was used to purchase 80 portable police radios. They were deployed to Wellesley Public Schools for use by the faculty and staff, which use them to communicate school business daily, and in the event of an emergency, WPS staff can communicate directly with the Wellesley Police Department. Staff was trained by members of the Police Department in the proper use.

11. Price checks. The Department of Weights and Measures checked 300 items in local retail stores to ensure they priced (scanned) correctly. Retail stores inspected exceeded the 98 % accuracy rate required by the National Institute of Standards and Technology.

12. The math gap: “The Wellesley Public School district formalized its effort to analyze the persistent achievement gap that impacts student achievement among several groups of students, particularly in math.  A Math Achievement Gap Task Force was assembled and met 5 times during SY18-19. The group comprises diverse stakeholders (e.g., math teachers, math department heads, principals, math specialists, and the assistant superintendent for teaching and learning). The Task Force analyzed multiple sets of quantitative and qualitative data which show persistent achievement gaps. The Task Force completed a root cause analysis and plans to continue its work during SY19-20 by visiting math classrooms in order to observe teaching and learning experiences more closely.”

13. Keeping designs current. “The Planning Department coordinated the release of a request for proposals on behalf of the Design Review Board for an update of the Town’s Design Guidelines Handbook. A consultant was retained to assist the Design Review Board, along with the general public, in developing the updated comprehensive Design Guidelines. It is anticipated that these guidelines will help guide commercial development in a way that respects existing village and architectural character, while also identifying preferred and encouraged design decisions with respect to buildings and sites.”

14. More field news. There was a ton of sports field-related activity in Wellesley last year, but here’s a development you might not be aware of.  The Playing Fields Task Force developed a relationship with MassBay Community College’s athletics staff in advance of new playing field construction on campus and explored opportunities to partner.

15. Outdated Public Notice rules live on: The town lists dozens of vendors with which it spent $5,000 or more. Babson College snagged $54K, Bibliotheca (library tech) earned $235K, Apple got $700K and Blue Cross took in $747K. There are about 800 organizations on the list, some of which might catch your eyes more than mine.

The most disturbing data we came across in the report (from a personal standpoint) pertained to the town spending thousands of dollars with a news outlet not called The Swellesley Report to post public notices, such as a restaurant applying for a transfer of its alcohol license. Outdated rules require local governments to post such notices in print publications (the publications must also put them online), but this leaves online-only publications like ours out in the cold even though people might be more likely to see the information here. Lots of changes will be coming soon nationwide on this front, with some communities just publishing notices on their own sites (which newspapers aren’t happy about). We hope that Wellesley will think creatively about how it spreads the word going forward. If you have ideas on this matter, please let us know.