A Swellesley reader asked this week what’s up with the apparent cameras now attached to traffic light poles at the Rte. 16 and 135 entrances to Wellesley College. Has Big Sister invaded town?

“This is a creepy change for Wellesley. The addition of these cameras is… adding an Orwellian image to the town,” the reader wrote.

We reached out to the Wellesley Police Department and Wellesley College to learn more about these gadgets mounted via white brackets. I took the picture below, risking that I was being recorded doing so by the thing I was photographing… 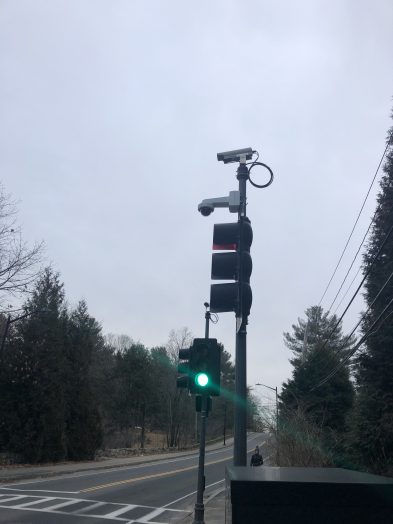 According to the Wellesley Police, these are the last 2 such intersections in town to get what the town calls traffic cameras. “They are not used for traffic enforcement efforts, such as enforcing the traffic lights/red lights,” says Lt. Marie Cleary.

“These are traffic cameras that will allow us to monitor traffic at both intersections in the same manner that we currently do at all other intersections in the town.  The cameras will allow the communications center to see if there is a traffic issue when we receive calls such as the traffic lights not functioning properly, complaints of traffic backing up at the intersection, traffic crashes etc.,” she says. “This allows the dispatchers to communicate information to the officers that are responding to these intersections if needed and often times lets them resolve the question or concern from the caller immediately.”

A Wellesley College spokeswoman said “Wellesley College Campus Police will be able to request that the Wellesley Police Department access the camera footage if needed as part of the investigation of a safety concern or incident on campus.”

As of Jan. 3, the cameras were not operational. But they should be soon.