While January is already more than a third of the way over, there’s still time for you to take the Zero Waste Wellesley Challenge this month and reduce your use of household single-use plastics by 50% in response to the world-wide plastic waste crisis.

Wellesley’s Valerie Gates is spearheading the effort, with support from other sustainability supporters in town, to identify an item each month to target. This will entail urging residents to stop buying the single-use items, such as  dish sponges and body soap bottles, and then crowdsourcing greener replacements that local retailers such as Roche Bros. and Whole Foods will be encouraged to carry.

“We hope that by creating a successful local initiative, it will gain attention and be adopted by other Massachusetts towns and eventually go nationwide in the coming years,” Gates says.

An episode of the Netflix “Broken” documentary series on plastic recycling inspired Gates to take action.

“I was also aware that China was no longer taking our plastics (good for them) and realized that we needed to stop this at the source—just stop purchasing the plastic in the first place,” says Gates, who is among those who have spoken up at recent Wellesley Board of Selectmen meetings in favor of declaring a climate emergency.

Gates doesn’t have a good way to quantify the reduction of single-use items in Wellesley, so you’ll just need to play by the honor system and do your part.

On a personal note, we’re not huge single-use plastic users, but one frustration is that certain members of the Swellesley family to remain unnamed have been known to treat re-usable water bottles as if they are single use… 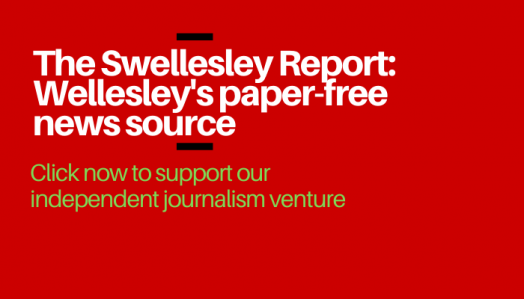