It’s not often Mr. & Mrs. Swellesley get to hang together on a weekday, but they made an exception on Valentine’s Day. They took it on the road beyond Wellesley all the way to Dedham, where destinations included the Horse Thieves Tavern and a movie at the Dedham Community Theatre. Good romantic stuff for a frigid February day.

The GPS said it would take about 20 minutes to get to Dedham Square, and that was true, though noon-ish traffic was a mess. We finally wove our way through and found a spot at a free parking lot on Eastern Avenue just past the theatre.

From there, we waited about an hour (OK, maybe a few minutes at the seemingly endless crosswalk lights) and made our way to the heralded Horse Thieves Tavern, which greeted us with a sign to “Come warm up by the fire.” The fire was out (“We don’t light it during the day”), but the restaurant was still plenty warm and inviting. We were told to sit wherever we liked and picked a corner spot against a big painting of a horse, and next to a small pile of board games.

We eschewed the “tavern” part of the tavern for now and ordered lunch, with water and a Diet Coke. I had the shepherd’s pie, which was served in a hot cast-iron skillet. It was just flavorful enough for me (not such an adventurous palette), filled with lamb, carrots, potato and surprisingly to me, some corn. Mrs. Swellesley went with clam chowder specked with color and half a BLT panini, both of which satisfied, especially the crispy bacon bits. It seemed as though they had stolen my music playlist, as the speakers played vintage and new indie songs from the likes of Cold War Kids and Modest Mouse, and not too loud. Service was friendly and helpful. The pre-tip bill came to about $30.

We then killed a bit of time before the movie by popping into local shops, including the Blue Bunny, a mostly kids’ books place with a Mocha Java Espresso Bar & Cafe tucked in. It smelled good in there, between the drinks and very good babies hanging out with their moms.

It only seemed appropriate to drop in to the Heart of the Square, a made-for-Valentine’s store brimming with jewelry, scarves, chocolate and red heart decorations. Mrs. Swellesley is threatening to return there for a scarf for spring. 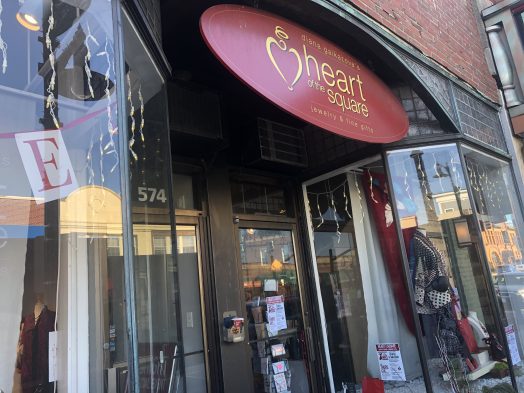 We made one last stop in to the Boston General Store, which sells kitchen things that you didn’t know you needed until you went in there. The sustainability crowd would love the glass straws, reusable veggie bags and more. The walls and shelves are decorated with taxidermy, which I like to think became art after the animals died of natural causes. Though my naive self was told by the pleasant woman working there that might not be the case.

Then it was time for the movie. The old-fashioned Dedham Community Theatre, where we miss the Museum of Bad Art. The theatre, which sits directly across from the tavern where we ate, is small and only has a few films playing. We’d already seen the Oscar-winning Parasite, so chose The Assistant, a day-in-the-life of a newbie at a film production company that casts a #MeToo shadow over the audience . Let’s just say for a 90-minute movie, it felt a lot longer. But that was part of the point. 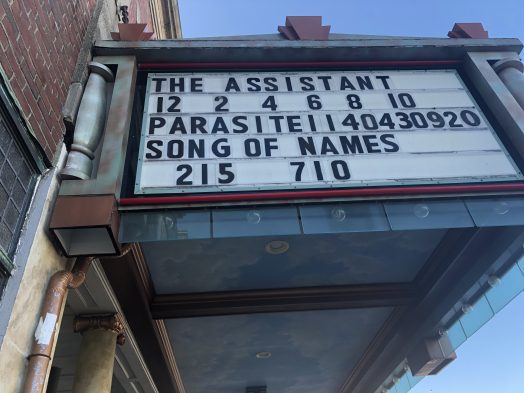 Neither of us was a fan of the film, as we discussed back at the Horse Thieves Tavern over a beer. A smattering of Valentine’s Day couples had started to populate the bar by then, and indeed, the fire was now on, even though it was still daytime. Good call.

Hope this recap shows I still love you too though.

Hey, Dedham businesses, Wellesleyites might love you if they knew you: Here’s how to Advertise in The Swellesley Report.