The spring line-up of Wellesley live-stream programs zoomed onto computers and smartphones this week, and the viewing has been compelling. That is, in light of sports, in-theatre movies and plays, visiting friends, eating out at restaurants and bars, concerts, and most other forms of traditional entertainment being on hold.

The blockbuster pilot episode of the Wellesley Board of Selectmen Live! on March 16 kicked off with a bang: the Town Election was being postponed after a court order went through!

Where could this show go after a start like that? We’re not going to spoil the cliffhanger for you, but let’s just say this jam-packed 42-minute episode swung from serious to feel-good (a teen texting one board member with an offer to pick up her groceries) to shocking (one selectman walking by a social distancing-challenged handful of late teenage boys playing beer pong). Yes, you’ll laugh, you’ll cry, you’ll multitask.

We can’t help but think a delicious plot twist will involve Ulfelder, who was bathed in streams of Godlight throughout the meeting.

If the BoS might seem too heavy for you, we recommend lightening things up with the Advisory Committee.

This tidy sub-hour program featured all the yucks you’d expect when this zany crew gets together on a live YouTube stream to discuss Town Meeting articles and the stuffing of envelopes.

One member got spooked when Ralph Tortorella’s close-up mug popped onto her screen and another was hidden behind what first appeared to possibly be a privacy screen. Another member described the group as “The 3 Stooges X 5,” as they fidgeted to get their devices working. Classic slapstick.

And leave it to John Lanza to get the obligatory Brady Bunch reference out of the way early in reference to the windows featuring members moving heads. A fellow member playfully suggested he would be “Alice” — “A place of honor as far as I’m concerned,” Lanza quipped. 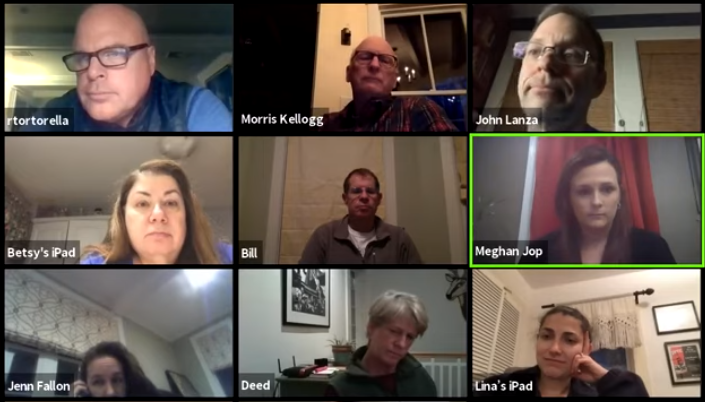 This “quarantine” edition of Advisory, as Chairman Todd Cook called it, revolved around discussion of such matters as a Special Town Meeting article involving firefighter retirement age, a topic that should be a big winner with first responders and the patriotic crowd. Rusty Kellogg even waved an American flag.

For you Dirty Jobs fans, the Department of Public Works might be more to your taste. DPW Director Dave Cohen takes a star turn, explaining what the organization is doing to protect the health of citizens and employees. This could easily be mistaken for a cop show.

Cohen calmly shed light on steps his team is taking to adhere to social distancing while doing their jobs, learning for example if customers are sick before deciding to enter a home for a routine call. Workers are also coming in on staggered shifts to lessen close interactions with each other, and the Recycling & Disposal Facility is taking steps to encourage people to keep their space (though participants cited some uncomfortably close moments they’ve had themselves recently at the dump).

The DPW is also going full-steam ahead into technology, including online permitting and getting employees geared up in case more of them need to work from home. This is the show for you if you’re concerned about what, if any, impact the coronavirus outbreak could have on the town’s infrastructure. Or if you want to hear about a citizen’s email about worries that landscapers are blowing coronavirus around with their leaf blowers.

The scariest line from Cohen: “My hope is that we’ll be able to keep the RDF open…”

Though there was other scary talk too, including how the DPW would handle coronavirus-infected sewage pipes. Cohen assured that the crew is prepared. “We’ve got Tyvek suits, we’ve got goggles, we’ve got gloves…we’ve got lots of disinfectant, we’re in that business.” As we all are these days.

The most disappointing aspects of these ratings sweep-week shows were the costume and set design. Most participants went with business very casual, which perhaps was fitting under the circumstances. These were no English period dramas.

And while not all participants were streaming in from Wellesley homes, many were. Not an indoor pool, priceless painting or elaborate conservatory to be seen. They need to work on that.