The third annual Plunge for Elodie at Wellesley’s Morses Pond was officially canceled due to the coronavirus (COVID-19) situation, though a “private” version of it still took place involving dozens of family and friends dunking themselves at frigid Morses Pond on Saturday at 8:30am.

The event raises funds to fight Epidermolysis Bullosa, a rare genetic disorder in which people are missing a critical protein that helps bind the layers of their skin together, making it extremely fragile. The plunge is named for 3-and-a-half-year-old Elodie, who has EB and is the daughter of Wellesley native Emily Kubik.

Plungers might have anticipated earlier this winter catching a break considering the nearly snow-free season. But temps around freezing and a brisk wind made it challenging, and I didn’t spot anyone spending any extra time in the water than they needed to despite the fact that at least a few braced themselves for the dunk with shots of Fireball.

Post-dip comments included: “The water wasn’t actually that bad, it was the wind” and “Brrrrrrr.” Plus a bit of locker room talk that I’ll spare you.

Not sure what they were fussing about though. The sun was out and the temperature wasn’t even freezing, says the guy who just there talking pictures and video. 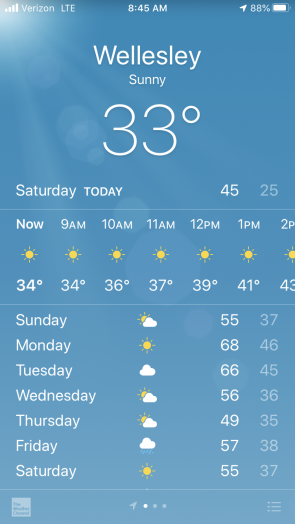 Among the more impressive feats of the morning were Wellesley High track and football coach John Griffith doing his best impersonation of Raiders track star Abby Comella as he sped out of the water, and the same went for Raiders head football coach Jesse Davis, unleashing his inner Shiloh White (Wellesley High running back).

The 2019 Plunge for Elodie raised $185k. This year organizers increased the goal to $300K, and more than $225K has been raised according to the fundraising website.  All funds raised go to coming up with a cure for this disorder.