When it comes to how much time they spend planting, weeding, and generally fussing out in the yard, gardeners can be a coy lot.  “Oh, I wander through before breakfast, deadhead the roses, pull a few weeds, and that’s pretty much it,” they’ll claim with a straight face.

Gardeners are such liars.

Joyce Hannaford is different. She comes clean right from the get-go. “I’m out here 60 hours a week,” she tells me when I stopped by recently for a tour of her almost quarter-acre property just outside Natick Center. When she copped to that 60 hours, it was the second time in two minutes my jaw had dropped. The first time was when I entered the garden. I wasn’t sure if I’d walked into a painting or a dream.

From the front, the home Joyce and her husband Charlie share looks like your average Natick home that’s maybe better tended than most. The lawn is perfectly edged, the windows sparkle, and there’s not so much as a stray leaf on the brick sidewalk leading up to the front door of the almost 100-year-old, two-story Colonial. But once you go around back, the concept of “average” disappears. This is no ordinary suburban spread.

Color is everywhere you look. A pink clematis vine winds its way up a wooden lattice fence next to a yellow rosebush. The Asiatic lilies look like they’re going to burst any second now, which will make the combination of three neighboring perennials in bloom at the same time complete — the gardener’s trifecta. Further along the path, purple delphiniums tower, leading the eye visually to the red maple tree, and the stacked stone wall behind. On a small stone patio near the detached 2-car garage, an enormous clay pot bursts with pinks, blues, and whites. A light-green galvanized watering can on a battered table completes the sense of a still life. 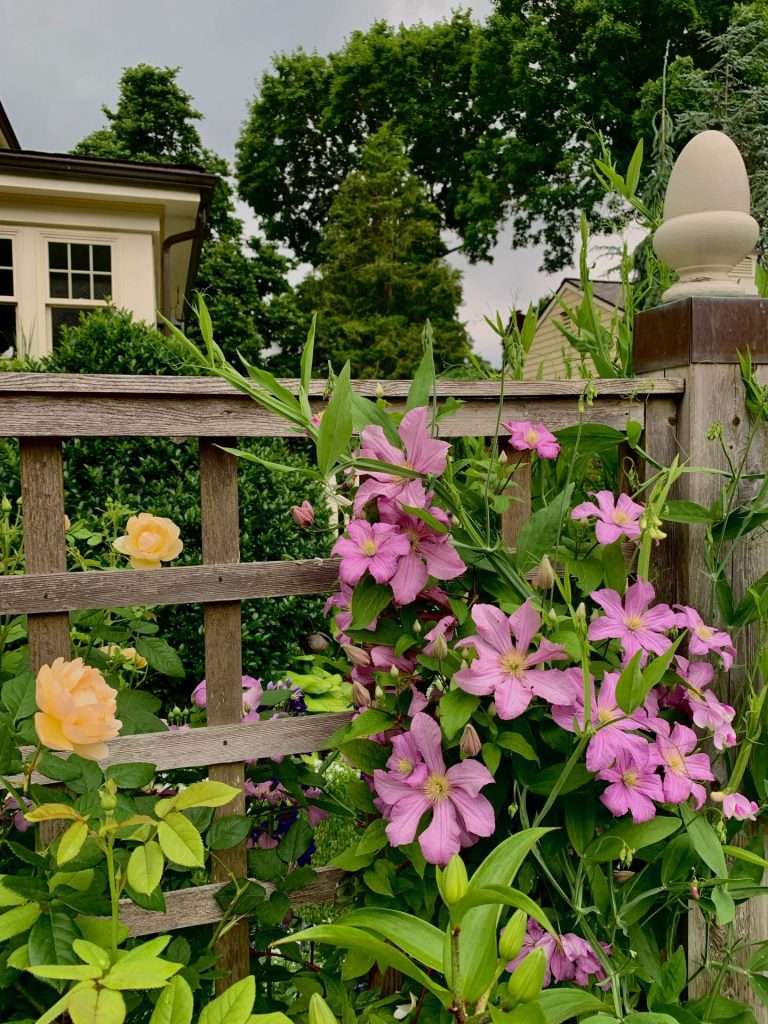 The garden, divided into seven rooms, is filled with such vignettes. It wasn’t always that way. The Hannafords bought the home in 1999. “It was a dump,” Joyce says. But it was a dump that met the seven criteria she’d demanded of her realtor: “It had to have a wood-burning fireplace; my oriental rug, grandfather clock, and canopy bed had to fit; it had to have garden space; the basement needed to be dry; and I wanted gas heating — no oil tank.”

Boxes checked, the Hannafords closed on the place and got to work. Although Charlie’s supposedly not much of a gardener, while I was there he looked pretty proficient with the extended clippers as he tamed the climbing hydrangea threatening to make a break for it and cover the garage. He’s also had a hand in creating the many stone sculptures scattered throughout the garden, and apparently takes orders from Joyce cheerfully enough. But for the past 21 years it’s been Joyce’s endless passion to experiment with color, form, and combinations. There’s no question that there are over 1,000 perennials in this garden, in various stages of bloom. “There’s always something popping,” the retired personal chef and caterer says.

A member of the Natick Garden Club (the people who design and tend the planters on the bridge over the Walnut St. commuter rail tracks, among other civic projects), Joyce frequently opens up her garden for tours. She also keeps a vegetable garden at the Hartford Street Community Gardens. “I’ve been gardening since I was 3,” she says. “Dad in New Hampshire had a huge vegetable garden. We ate from its bounty right through winter.”

She and Charlie aren’t all work and no play. Their place is made for entertaining. I eye their two-car garage and ask if they keep their vehicles inside. Gardeners are notorious for giving over garage space to gardening tools and equipment. Don’t ask me how I know this. But no. This is Joyce, and she keeps things just so. Charlie opens up the garage and behold, a car occupies one of the two bays. There are also twinkle lights that sparkle on the ceiling, and draperies that can be drawn to hide the workbench and hanging tools. A screen on the same type of track system as the garage door can be pulled down to keep the bugs out. It’s a working garage, but with a flick of the wrist, it’s also a party garage.

I take a few more pictures, then reluctantly leave Eden. Comparisons are unhealthy and all, but personified, my garden looks like a bohemian who’s had a too much absinthe (for details on that hot mess, check out my rack and ruin garden). Personified, Joyce’s garden looks like a top model who has her life together. I vow to make a better effort in my own yard. Truthfully, though, I ‘d rather just be Joyce’s backyard neighbor, who has a view of the garden without having to do all the work.

“Come by anytime,” Joyce calls out, with a wave.

Oh good. I haven’t been cast out of Eden. I’ve been given a chance to return and maybe and learn a few things. 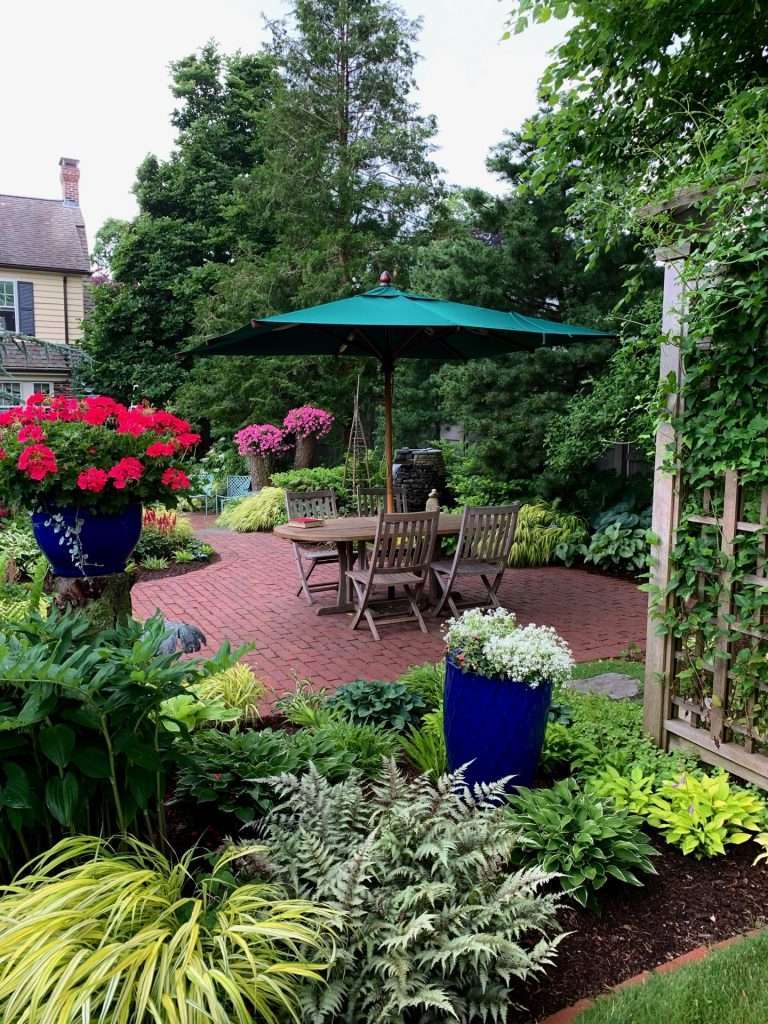