Nothing strikes fear into Wellesley residents like these two words: bridge project.

I still shudder a bit every time I go by the Rte. 9/Rte. 16 bridge that took seven years to build before being wrapped up in 2010. Other  bridge projects in town have had their issues, too. 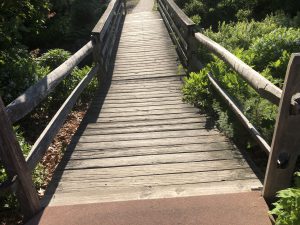 But hopefully the 5-foot wide, 40-foot long span planned to replace the current duck pond bridge in front of Wellesley Town Hall will be a relative snap.

The town has issued a bid document, due June 25, for construction work on the bridge.

(By the way, if you happen to bid on this project, and especially if you happen to win the bid and found the information here first, please let us know…as the town should be spending our tax dollars more wisely by advertising this sort of stuff on Swellesley instead of old-fashioned newspapers, but I digress.)

The project includes replacement of the current wood pedestrian bridge that goes over the duck (mostly goose) pond on Washington Street in front of Town Hall. The DPW will be demolishing the duck pond bridge.

Town Meeting last year approved $91K in Community Preservation funding to the Natural Resources Commission for reconstruction of the bridge. The current structure is decaying, though it did support my giant self just last week when I gingerly tested it out. The current bridge also doesn’t meet accessibility codes.

To our knowledge, consideration was not given to converting the structure to a drawbridge, just in case giant ducks might want to pass under.