Wellesley has been discouraging people from idling their vehicles in town for years now, whether it’s at schools, supermarket parking lots or the Recycling & Disposal Facility. Signs warning against idling have been installed at the schools, where cars waited in long lines pre-COVID-19.  Students giving out flowers and flyers have pleaded with those in line at the middle school to stop idling in the name of human and environmental health. The Natural Resources Commission has installed signs near its properties to ward off idling, as it emphasizes that vehicle exhaust has been linked to increases in allergies, asthma, cancer and other conditions among children.

While many have gotten the message, others haven’t, despite the fact that there’s a state law against idling for more than 5 minutes that could whack you with a $100 motor vehicle citation for a first offense and up to $500 if you don’t learn. “It’s not a parking ticket,” said Wellesley Police Chief Jack Pilecki during this week’s Board of Selectmen meeting.

But Pilecki, in speaking with Sue Morris of the Green Schools initiative and Phyllis Theerman of Sustainable Wellesley, hit upon the idea of making anti-idling a new regulation on the town books that actually would be a like a parking ticket. So a cop could write you a $15 idling ticket that would be far less harmful to your wallet than a motor vehicle citation, but still get the message across.

This isn’t to say cops would be handing out tickets on 100 or 0 degree days when idling to keep the AC or heat on might be understandable. It’s for other times when idling is done more out of habit.

If this change to town traffic regulations goes through, it would first be subject to a public hearing. The town would also undertake an education campaign, and officers might start by doling out warning tags, like they do now for overnight parking violations.

It’s possible, too, that parking meter attendants could have this tool at their disposal. But that remains to be discussed.

What about town vehicle idling?

You might wonder: What about town employees and their idling vehicles?

Well, it’s true that the police may at times idle their cars to accomplish parts of their job.  “We are asking our officers to shut off the cruiser engine when possible and practicable.  There are a few issues with this,” Pilecki says. “The computers in the cruisers time out and shut off after a certain amount of time, as does the radio they use to communicate with dispatch. And clearly if they are running radar it can be problematic to have to start the cruiser when you are trying to get out into traffic and stop someone.”

The good news, Pilecki says, is that the Wellesley Police Department is testing a hybrid cruiser that operates like a Prius.

“It basically shuts down when the engine doesn’t need to be running.  So far the hybrid cruiser is working out well and we will be moving all of our cars in that direction.  We have 4 ordered for the next time we have to replace some cruisers,” he says. 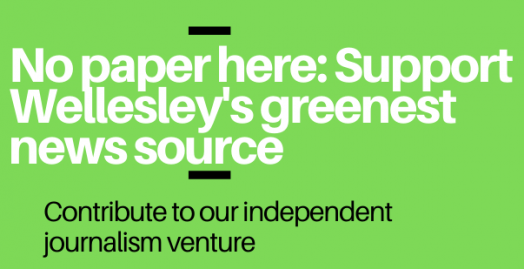