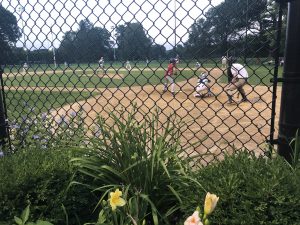 We started getting messages this week regarding whether certain baseball fields in town were being shut down due to teams flouting COVID-19 safety rules. Yes, Wellesley Youth Baseball teams have stopped playing games for now at Brown Field and night games at Reidy Field, but not because of participant behavior.

Wellesley Youth Baseball & Softball President Tom Ahern knew this season would be unlike any before it, with rules in place forbidding players from sharing equipment and requiring face coverings, among other things. Coaches at times have spent as much time reminding kids (and fellow coaches and parents) to pull up their masks as encouraging players to keep their eyes on the ball.

But overall, he calls the experience “incredibly worthwhile,” as kids have had fun playing a team game and getting together with other kids. Pitchers are still pitching, and batters are still batting, he says.

“I don’t think the safety protocols are onerous,” he says. “They haven’t harmed the game.”

However, the league can really only patrol what’s happening on the fields that it is permitted to play on (and its decisions may be different than those of separate club teams that use the fields). The league has less control over spectators who tend to come by for Reidy Field night games and don’t always want to play by the same rules. “It’s a great gathering spot,” Ahern says, pointing out that the fields are within public parks. This is where the problems have surfaced, and neighbor complaints have cited similar issues at Brown Field.

Ahern praises various town outfits, from the Natural Resources Commission to the Board of Health, for their assistance in making the baseball and softball seasons work. Adjustments have been made mid-season, such as increasing the time between games at Reidy to avoid as much team crossover and allow for more cleaning, and the league has supplied players with pull-up gaiter face coverings that are simpler to deal with than masks.

The league soon starts up its playoffs for all teams, then on to fall ball, which no doubt will have adjustments of its own to make.