I doubt I’m the first person most of my friends think of when it comes to hair. I’ve had the same big boy haircut, parted on the left, since I’ve been getting clipped and trimmed by people other than my Mom. My once brown locks have long given way to gray and white, with not quite enough of it to cover the top of my head. When out and about, my hair and scalp are more often than not protected under a baseball or winter cap.

But when Walter Jones of Wellesley’s Barber Walter’s barbershop texted me in late August to see if I’d mind being his work of art for a taping of WCVB’s long running TV news magazine Chronicle, I couldn’t say ‘No.”

After all, we once attended Blue Man Group with Walter and his wife, Kat, and Walter unluckily wound up getting plucked from the crowd and being subjected to rascally Blue Man antics on the stage.

As I approached the shop on Sept. 1, I expected to see big vans and bright lights, and maybe a red carpet. But Chronicle is an efficient operation: Reporter Shayna Seymour and a cameraman whose name I didn’t catch had things under control.

Walter elbow bumped me at the entryway of the Belclare Wellesley shop and whisked me into one of his fancy chairs, imported from New York before the business opened at the end of 2018.

We were asked by the Chronicle team to carry on like they weren’t there. Walter’s fellow barbers, Cristian Lopez and Jeff Koseski, had no problem carrying out their professional duties, perhaps hiding a snicker or two at the show on the other side of the room.

Walter and I typically have no trouble yapping with each other about everything from eclectic music to books to boomerangs, with little need for segues. But encourage us to act natural and that’s when the slightly unnatural banter begins. Walter asked lots of questions about Swellesley and our newish Natick Report, and I quizzed him on the finer points of Barbicide disinfectant and sandalwood shaving cream. The camera swirled about my pate and the barber’s hands and tools.

After my clean cut,  I thanked Walter and headed for home.

But I didn’t get far before the reporter corralled me for a few questions outside the shop. 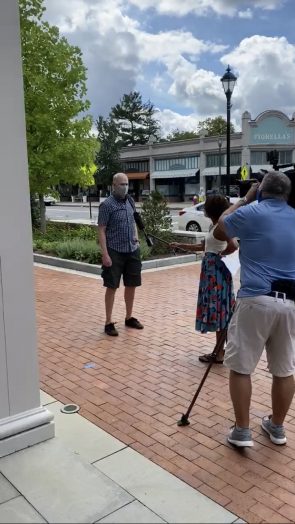 Shayna asked: How do you feel after your new cut? “Unrecognizable,” I replied.

She froze me with the fill-in-the-blank question: “A good hair day puts a spring in your step, a bad hair day…?” But I rebounded by sharing how I’d learned my lesson about at-home pandemic haircuts from our boys, who had at each other’s heads.

How much of this made the cut? We’ll see when the Chronicle segment airs on Tuesday, Oct. 13 at 7:30pm.