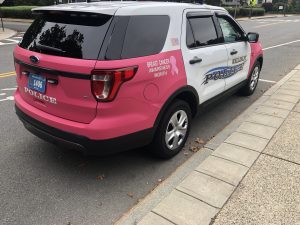 Wellesley, Mass., Police log for the week of Oct. 12-17. The Department responded to seven calls regarding mental health concerns in addition to the incidents below:

On October 12, 2020 at 10:51 a.m. Officer Misho was dispatched to Boulder Road for a reported past breaking and entering.  Forced entry was gained through a rear door.   It appeared someone had gone through all of the bureau drawers in the bedroom and jewelry was taken.  Detectives responded and processed the scene or any potential evidence.  The incident is under investigation.

On October 12, 2020 at 11:31 a.m. Officer Mankavech was dispatched to Pilgrim Road for a report of a found bike.  A Trek mountain bike was located on the reporting party’s property.  The bicycle was transported to the police station where it will be held as lost property.

On October 12, 2020 at 4:55 p.m. Officer Griffin spoke with a male reporting party regarding a fraudulent unemployment claim filed using his personal information.  He stated he did not file the claim and the incident will be investigated by the Department of Unemployment.

On October 12, 2020 at 4:50 p.m. Officer DiCenso was dispatched to Brookside Road for a report of a small fire in the woods.  The Wellesley Fire Department extinguished the fire and Officer DiCenso spoke to two youths who were responsible for setting the fire, and their parents.

On October 12, 2020 at 3:53 p.m. Officer Misho was dispatched to a residence on Cliff Road for a report of a past breaking and entering.   It appeared entry had been gained through a window.  Detectives responded and processed the scene for any potential evidence.   The homeowner will provide Officer  Misho with a list of items missing from the residence.  The incident is under investigation.

On October 12, 2020 at 7:15 p.m. Officer Misho spoke to a female reporting party who stated that she had received fraudulent emails from someone posing as PayPal and had done an internet search for PayPal’s number and called two different numbers and upon speaking to an unknown individual who she thought worked for PayPal she provided them with her Debit Card information, driver’s license number and home address.  The reporting party noticed a $1,200 withdrawal from her account a short time later.   She notified her bank about the fraudulent transaction.  Officer Misho attempted to call both phone numbers the reporting party had called when she thought she was calling PayPal and both numbers had been disconnected.  The incident is under investigation.

On October 13, 2020 at 6:32 p.m. Officer DiCenso spoke to a male reporting party about a fraudulent credit card that was opened using his information in 2018.   He stated he had subscribed to Experian credit monitoring service at the time and they disputed the fraudulent account on his behalf.  He recently received a letter from a credit collection company and they advised him to dispute the fraudulent charge he would need to file a police report.

On October 14, 2020 at 6:30 a.m. Officer Fritts spoke with a male party who stated his rear license plate was either lost or stolen the previous day.  It was entered into the NCIC system as stolen and the appropriate paperwork was completed so he can request a replacement plate through the registry of motor vehicles.

On October 15, 2020 at 3:00 p.m. Officer Gover spoke with a male reporting party who was the victim of a fraudulent unemployment claim.  He was advised to file a claim with the Massachusetts Department of Unemployment Assistance.

On October 17, 2020 at 6:41 p.m. Officer Rosenberg was on patrol when he observed a Ford van traveling on Worcester Street without any headlights while it was still dark.  He stopped the vehicle and spoke with the operator and requested his license and registration.  A query of his information showed that he did not possess a valid driver’s license.  He will be summonsed to Dedham District Court for Unlicensed Operation of a Motor Vehicle.

On October 17, 2020 at 2:14 p.m. Officer Rosenberg spoke with a female party regarding a child custody issue.  The child was refusing visitation with the other parent and the reporting party’s attorney advised the reporting party to file a police report to document the matter.

On October 17, 2020 at 3:04 p.m. Officer Rosenberg spoke with a female party who stated a fraudulent unemployment claim had been filed using her personal information.   She had already reported the fraudulent claim to Department of Unemployment Assistance.