About three-quarters of Wellesley voters chose Joe Biden over President Donald Trump in Tuesday’s Presidential Election, though the results are unofficial. This is based on ballots cast by 90% of registered voters.

Biden won all eight Wellesley precincts. The same was true for Hillary Clinton in 2016.

This time around the Democratic ticket picked up a couple thousand more votes in Wellesley than it did in 2016, while the Trump-Mike Pence ticket garnered roughly the same number of votes in both years. 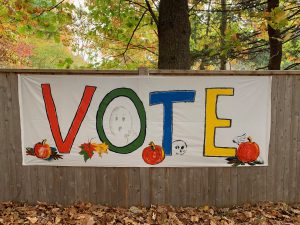 With so many Wellesley voters casting their ballots early, it made for a relatively quiet day at the polls based on our observations and reports from readers.

Wellesley’s results were consistent with those of the state as a whole, according to unofficial results.

On the ballot questions, Wellesley went with Yes on Questions 1 (expanded right to repair) and 2 (ranked choice). The state went with Yes on 1, but No on 2, according to the latest results.

As for the bigger picture on the Presidential election, we’ll see…