At a November 30th Wellesley Select Board meeting during Citizen Speak, a Wellesley resident and a member of the Committee to Preserve Wellesley’s Italian American Heritage spoke about a rash of lawn-sign stealing in town. The signs read, “Italians are people too. Support inclusivity. Vote no on March 2nd,” and they direct people to the ballot committee’s website.

The signs have cropped up as the March 2, 2021 Annual Town Election draws closer. At that time, a non-binding ballot question will be put to voters asking whether  the Select Board should proclaim that the second Monday of October be commemorated as Indigenous Peoples Day and cease to be recognized as Columbus Day in Wellesley. More here. 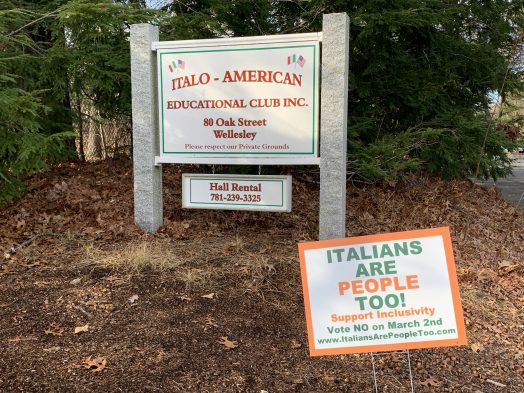 “I’m here tonight to speak about intolerance and sign theft,” Joanne McIntosh said, telling the Board that over two dozen of the Italians are People Too signs have been stolen from private residences and commercial properties, and that twice she has had signs stolen from her yard.

“Regardless of anyone’s political view about Columbus Day, we don’t think that sign theft should be happening in Wellesley,” McIntosh said. “We feel that these sign thefts are an attack on our free speech and our property rights. There are many Italian Americans in this town like myself who feel their heritage is under attack.”

Under the sign-stealing influence?

Sign stealing reports have been popping up in Wellesley Police logs. McIntosh said Wellesley Police discovered the identities of three young people who stole signs from her front lawn, and that she and her husband had the opportunity to speak to them. “They told us they stole the signs to support Indigenous Peoples Day. We wonder what influences are these young people are being exposed to that encourage them to respond so inappropriately to an intellectual argument over Columbus Day.”

Lt. Marie Cleary confirmed that a WPD officer responded to a call from a resident regarding stolen signs. The reporting party had a security camera, which showed that a white van came onto their property, someone exited the van and removed the sign and then got back into the van and left the property and disposed of the signs in a dumpster. The van then drove away, and the reporting party followed the van and called the police

An officer was dispatched and located the van in the owner’s driveway and knocked on the door of the residence. Lt. Cleary in an email said, “he spoke with a juvenile and then the parent of the juvenile.  There were two other juveniles present and Officer Gaffney asked them to speak to their parents about what had happened and then he followed up with their parents the following day. The juveniles were informed that removing signs from an individual’s property was a theft and if they were associated with the removal of signs in the future they could face criminal charges.”

The arc of history is long

Wellesley has an unfortunate and long history of sign theft. Recent thefts occurred last summer, when Black Lives Matter signs all over town were being torn down, defaced, and stolen. In addition, political candidate signs seem always to be considered fair game, as are signs that encourage voters to cast a “yes” ballot for one issue or a “no” for another.

The leadership of World of Wellesley (WOW), an organization that supports replacing Columbus Day with Indigenous Peoples Day, was dismayed to hear about the theft of the signs. WOW co-presidents Nova Biro and Christina Horner said, “It’s important for all community members to respect each other’s property. Our constituents have also been targeted with repeated thefts of Black Lives Matter signs. Unfortunately, we understand that yard sign thefts are not uncommon in our community. We hope town members will strike a new tone of respect moving forward.”

In light of the Italians are People Too thefts, McIntosh cited the town’s Tolerance Pledge, adopted in 2016, in which the Select Board “reaffirms its position that Wellesley is a town that highly values diversity, dignity and respect for all individuals” and “opposes expressions of hate, intolerance and discrimination.” (You can see the Pledge in its entirety here.

Select Board Chair Marjorie Freiman assured McIntosh that continued efforts to embed the Tolerance Pledge’s ideals into all aspects of civic life are happening on a number of fronts.