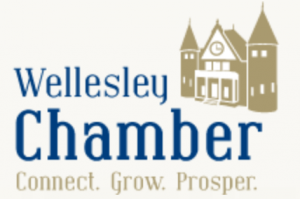 The Wellesley Chamber of Commerce has agreed to become part of the increasingly vibrant Newton-Needham Regional Chamber in an effort to help local businesses and nonprofits better get their voices heard from Town Hall to Beacon Hill, and to help one another thrive. The move becomes effective Jan. 4.

“The pandemic acted as a catalyst to our decision—and it is a silver lining to these challenging times. With the expanded geographic footprint and diversity of membership, Wellesley businesses joining the NNRC can expect to “Connect. Grow. Prosper,” just as they have under the Wellesley Chamber umbrella since 1959,” the Wellesley Chamber’s Board wrote to members on Sunday.

The Wellesley Chamber’s website lists about 200 members. The Newton-Needham trade group boasts 900, including 50 from Wellesley. After Newton and Needham, Wellesley represents the most members in the regional chamber, says Greg Reibman, president of the Newton-Needham Regional Chamber. “It’s really hard being a business association with a small footprint,” he says.

Given the current business climate, which has left Wellesley pockmarked with empty storefronts and offices, having a stronger collective voice is crucial.

A subcommittee will be formed to focus on Wellesley interests, and ultimately, to participate on the regional chamber’s board.

The Newton-Needham chamber has gone into overdrive during the pandemic, bringing local retailers together in lively panel discussions featuring frank discussion about about their operations. The Chamber also initiated a 50 Most Influential Business People of Color in MetroWest list and has provided supportive resources for local businesses, such as a list of restaurants offering curbside, pickup, and delivery.

If anything has been going on with the Wellesley Chamber of Commerce in recent months, it was a well kept secret.

The Chamber used to be a big thing. It drew a crowd to an annual awards dinner at the Wellesley College Club where members patted each other on the back and recognized other movers and shakers in town. The Chamber, which boasted hundreds of members, raised funds for good causes through auctions and golf tournaments.

But increasingly, the Chamber didn’t seem to be doing much of anything. It doesn’t list a single event on its online calendar for 2020, and while the pandemic has of course nixed most in-person gatherings, virtual opportunities existed.

Our inquiries to the Chamber in recent months went into a black hole. When we did hear back, the Chamber didn’t have much to say. We tried to join the group a couple of years ago, just to be supportive, but its website sign-up system didn’t work and we took that as a sign.

The Chamber clearly wasn’t keeping up with the times, such as on the social media front. It abandoned its Twitter account in mid-2018, and its last Facebook post, regarding an event featuring Red Sox President and Wellesley resident Sam Kennedy, came in January of 2019. What about the Chamber’s Instagram account? No such thing.

The Town of Wellesley has made efforts throughout the year to boost businesses, such as via a COVID-19 relief fund and loosening of rules around outside dining. But of course businesses across town would no doubt like to see more.

We asked Wellesley Executive Director Meghan Jop, during a meeting of Wellesley merchants in late August, for her take on the Chamber. She raised her eyebrows and said: “We have tried to be inclusive and include them in various programs, but to date I haven’t seen a significant effort, particularly in our smaller business areas. It’s something that I think needs improvements.”

The most visible group of Wellesley businesses during the pandemic has been retailers in Wellesley Square, Linden Square, and Church Square, and they’re being encouraged to join the Newton-Needham Regional Chamber if they don’t already belong. Gillian Kohli, of Wellesley Books, is on the chamber transition team.

Though the Newton-Needham Regional Chamber serves all sorts of Wellesley businesses and nonprofits, both large and small.

“Service providers such as my firm will certainly benefit from the connections that can be generated from such a vibrant organization, which is one of the most significant goals for any chamber member,” says attorney Eleanor Uddo of Feigenbaum & Uddo in Wellesley.  “In addition to that, the guidance and birds-eye view of many factors impacting businesses in the area is going to be a benefit for all of us.”

Wellesley Chamber of Commerce members, as they morph into Newton-Needham Regional Chamber members, now have a fresh opportunity to help one another and learn from businesses in the region.

The letter in which the Wellesley Chamber’s board notified members of the change is packed with the sort of jargon, such as “synergy” and “pivot” and “win-win,” that only businesses can love.

We have a feeling that Wellesley businesses are going to get along just fine with their new chamber mates.