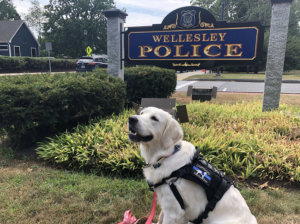 On March 9, 2021 at 12:35 p.m. an officer was conducting traffic enforcement on Worcester Street when the Mobile License Plate Reader in his police vehicle indicated a Ford Van’s registration was potentially suspended.  The officer confirmed this information through a query of the vehicle’s registration.  The officer stopped the vehicle, spoke with the male operator and asked for his license and registration.  A query of the operator’s information revealed he did not have a driver’s license.  He will be summonsed to Dedham District Court for Operating a Motor Vehicle with a Suspended Registration and Unlicensed Operation of a Motor Vehicle.

On March 9, 2021 at 1:44 p.m. an officer was dispatched to business on Central Street for a report of a female party who was being disruptive.  The business manager indicated they wanted to serve the female party with a letter of no trespass.  The officer was advised she was no longer welcome at the business and if she returned she could face criminal charges.

On March 9, 2021 at 2:04 p.m. Officer Collins spoke to a female reporting party regarding credit card fraud.  The female party stated she received several emails from Wayfair regarding 13 items that were purchased and delivered to an address in Greenville, Mississippi.  The total cost of the items was $2,995 and two of the reporting party’s credit cards were used to make the purchases.  The reporting party had notified the credit card companies of the fraudulent purchases, she contacted Wayfair to advise her account had been hacked and contacted the three major credit reporting agencies to place a fraud alert on her information.  Officer Collins attempted to contact the phone number associated with the purchase and was unable to make contact with anyone.

On March 10, 2021 at 9:47 a.m. Officer Kane spoke with a female reporting party who stated it appeared an unknown individual was testing out credit card numbers through their website to see if they were valid credit cards.  On March 9th there were two individuals using two different IP addresses that processed several credit card payments though their website.  They wanted to notify the police department in case the credit cards were being fraudulently used.

On March 10, 2021 at 10:49 a.m. Officer Hughes spoke with a reporting party from a business on Central Street about cyber fraud.  The report is incomplete at this time.

On March 10, 2021 at 10:59 a.m. Officer Cunningham spoke with a male and female reporting party regarding their cellular phones being hacked by an unknown individual.  They stated they went to the Apple store and were advised their Gmail accounts associated with the phones had been hacked.  They changed their Gmail accounts and purchased new phones.

On March 10, 2021 officers responded to Roche Bros Supermarket for an unwanted party who had previously received a letter of no trespass.  The reporting party stated that he confronted the female party about being in the store and she began yelling at him and left the store with her shopping cart full of groceries.  The store employee advised her she had not paid for the groceries and she would have to leave them behind.  When officers spoke to her she acknowledged she was aware of the no trespass order.  She will be summonsed to Dedham District Court for Trespassing.

On March 12, 2021 Officer Dennehy was dispatched to a residence for found property.  The male reporting party stated he was a contractor working on the residence and he found a shotgun that possibly belonged to the prior owners.  Officer Dennehy took possession of the firearm and contacted the prior homeowner who indicated the firearm did belong to a family member and they would make arrangements for the appropriate transfer of ownership to a family friend.