Wellesley Department of Public Works Director David Cohen announced during this week’s Board meeting that the DPW now has its very own Twitter handle: @wellesleydpw. 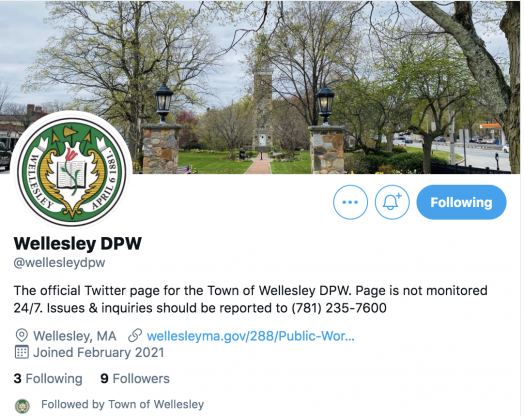 The social media feed, which has been in testing for the past couple of months, is part of the department’s community engagement plan.

“Our intention is to use this for important announcements that either the traveling public needs or our customers need,” Cohen said. “We’re not intending initially to have this to be just a sort of feel good type of communication.”

Think road closures, water main breaks, hydrant flushing, and the like. That’s similar to what other communities, such as Natick, use their DPW Twitter handle for.

Hopefully it will grow into an interactive communications tool, too, so that people can ask questions about things like the RDF Give & Take reopening plan or what’s up with the surveyors on that short gravelly stretch of sidewalk just west of the Elm Bank Reservation entrance.

We’re grateful that the DPW doesn’t appear poised to use Twitter for the sort of pandering common among public officials on social media.

We’re also hoping it means that the DPW won’t be joining in that awful and ubiquitous social media game of celebrating all sorts of made-up “national days.” We’d better not see the DPW Twitter feed celebrating National Beet Day on July 8, for example, in honor of its beet juice mix for treating roads before snow and ice storms.

Meanwhile, we’ve started to follow @wellesleydpw and encourage them to follow us @swellesley so they can see what we’re writing about them…