Just because Natick is way over there, doesn’t mean you shouldn’t be paying attention to what the town is up to. Natick’s moves could have a big impact on Wellesley residents’ lives.

Wellesley residents on the Natick line near Rte. 9 East and the Morses and Jennings ponds have been trying to make their voices heard as Natick narrows down candidates for a recreational marijuana shop. One of the proposed locations is at the current Nine East Wine Emporium, though the vibes we were getting from a recent Natick Select Board meeting and based on the latest town rankings is that this location is not likely. But you never know.

Neighbors have expressed concerns about increased traffic in their neighborhood, among other things. Natick Select Board members have listened to neighbors and acknowledge their concerns, though also have stated that many others are looking forward to recreational marijuana shops opening and just don’t want to speak out publicly.

A discussion of the Natick proposals is on the Wellesley Select Board agenda this Monday, May 10.

Meanwhile, at the very opposite end of town, Natick is ramping up communications regarding a decision it needs to make about the fate of the iconic dam in South Natick on the Charles River. The choice currently comes down to fixing the dam and spillway, or ditching them.

What breaching the dam could mean for those downriver, including Wellesley residents and businesses, is unclear but nerve wracking. Any bad repercussions for those not in Natick will likely not be at the top of that town’s list of priorities after such a deed is done.

Natick Town Meeting in 2019 approved $1.25M in funds to fix the dam. But since then the prospect of just getting rid of it has been been entertained, and encouraged by those who speculate that there will be environmental, town cost, and safety benefits to doing so. Natick hopes to make a decision by year-end. 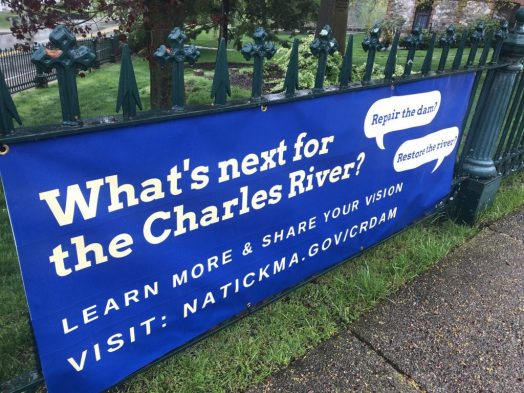