Wellesley Natural Resources Commission (NRC) has written a letter urging the Massachusetts 21st Century Mosquito Task Force to put the state on a path toward ditching toxic pesticides and embracing more ecologically-friendly ones in the fight against disease-carry mosquitoes.

The Task Force has been formed “to study the Commonwealth’s mosquito control process and recommend comprehensive reforms of the current mosquito control system,” and has regular public meetings.

It also has invited public comment, and the NRC isn’t shy about that.

Chair Raina McManus said during the May 20 NRC meeting (at about 1-hour, 40-minute mark of Wellesley Media recording) that the Commission’s position is consistent with that of the Wellesley Board of Health’s approach to mosquito control. The town has long avoided adult mosquito control, McManus said. Rather, the town’s focus has been on habitat control and larvicide.

Wellesley stays in sync with other communities in testing for mosquito-borne diseases such as West Nile Virus and EEE via the East Middlesex Mosquito Control Program, for which Wellesley Public Health Director Lenny Izzo is the chairman. Wellesley gave notice in April that the Program was conducting a larvicide application in parts of town via helicopter.

The concerns about mosquito spraying are many, with attention of late being called to possible contributions to high PFAS levels (aka, forever chemicals) in Massachusetts water supplies. Wellesley is among the communities addressing high PFAS levels in drinking water but has not yet determined the source of PFAS in town water.

The Boston Globe reported recently that more communities, mainly in western Massachusetts, are opting out of state aerial and roadside pesticide treatments due to PFAS worries.

Pesticides also run counter to efforts in Wellesley to support pollinators, which can be harmed by spraying. 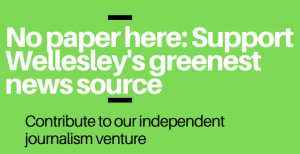