Wellesley MA police log for the week of May 25-30:

On April 22, 2021 Officer Cunningham received notification that a known suspect was in custody in New Hampshire.  He was aware that there were four default warrants for her issued by the Dedham District Court.  On May 25, 2021 he went to Dover, New Hampshire and took the woman into custody.  She was transported to the Wellesley Police Department where she was booked in the usual manner, afforded all rights and transported to Dedham District Court.

On May 28, 2021 at 9:50 a.m. Officer Mankavech was conducting a security check of parking lots in the Lower Falls area.  The License Plate Reader in his marked cruiser altered him to the fact that there were two active warrants for a woman issued by Brookline District Court for Larceny from a Building and Credit Card Fraud.  She was taken into custody, transported to the station, booked in the usual manner, afforded all rights and later transported to Dedham District Court.

On May 26, 2021 at 2:10 a.m. Officer Knapp was conducting traffic enforcement on Worcester Street when he observed a vehicle traveling at a high rate of speed.  He confirmed the Honda sedan’s speed to be 85 mph in a 50 mph zone.  He stopped the vehicle and spoke with the female party, who stated her driver’s license was suspended.  He confirmed the license suspension with the registry of motor vehicles.  The operator will be summonsed to Dedham District Court for Operating a Motor Vehicle with a Suspended License and Speeding.

On May 27, 2021 at 1:50 p.m. Officer J. Popovski spoke with a female party who stated she was being harassed by two former business partners.  The female party stated that she dissolved the partnership and they are now threatening to harm her reputation.  Officer Popovski advised the reporting party that it is a civil dispute and suggested she speak with an attorney.

On May 27, 2021 at 2:27 p.m. Officer J. Popovski spoke with a male reporting party regarding a stolen cellular phone.  The reporting party stated that he must had inadvertently left his cell phone on his vehicle when he parked in the Municipal Parking Lot near Church Street.   He attempted to call the number and the phone was answered by an unknown individual.  He activated his find my phone app and found the phone resting on a trash barrel on Washington Street near State Street.  There are no suspects.

On May 29, 2021 at 4:52 p.m. Officer Harris was dispatched to the Sprague School Fields for a report of an elderly female party who appeared confused.  The female party was able to provide officers with her name, but was unable to provide them with any additional information.   Officers were able to locate family members who resided nearby who stated the female party suffers from memory issues.  They responded to pick up the female party and return her home.  Officer Harris advised them our Elder Resource Officers would be advised of the incident and would reach out to them with some information about resources potentially available to assist them.

On May 29, 2021 at 11:27 p.m. Officer Harris was dispatched to a residence for an unknown male party attempting to gain access to the residence with a key.  A juvenile party was located around the side of the house and appeared to be intoxicated.  He was able to communicate his address to the officers and an adult was contacted to take custody of the juvenile.  The parent indicated they had previously lived at this address and had moved a few years ago.   The parent refused medical treatment for the juvenile.

On May 30, 2021 at 3:37 a.m. Officer Dennehy was dispatched to Worcester Street near Oakland Street for a report of a single car crash.  Upon his arrival he observed a Nissan sedan against a tree.  He spoke with the male operator who indicated he was traveling from Framingham to Brockton, but was unsure how the crash occurred and stated he was just following his GPS.  The male party was transported to the hospital for evaluation.  Officer Dennehy spoke further with him at the hospital regarding a license restriction that indicated he could only operate a motor vehicle during daylight hours.  The male party stated that he needs glasses and he was aware that he should not be operating a motor vehicle at night.  He will be summonsed to Dedham District Court Operating a Motor Vehicle in Violation of a License Restriction and Marked Lanes Violation.

On May 30, 2021 at 9:50 a.m. Officer Dennehy responded to a motor vehicle crash on Worcester Street at Washington Street.  He spoke with the female operator of the vehicle who stated she was driving straight ahead when her vehicle suddenly spun out and struck the retaining wall.   The female party was transported to the hospital for evaluation.  She will be summonsed to Dedham District Court for Unlicensed Operation of a Motor Vehicle, Marked Lanes Violation and Equipment Violation (bald tires).

On May 30, 2021 at 10:30 a.m. an officer spoke with a male party who stated there is a group of teens that keep entering a building on Linden Street and leaving behind trash and attempting to open packages left for other businesses in the building.  He was advised to contact us in the future should the teens return so we could speak directly with them.

On May 30, 2021 at 1:01 p.m. Officer Kane spoke to a male party who stated he took a ride share home the previous evening and inadvertently left his wallet in the car.  He contacted the ride share company and was advised that the wallet was not located in the vehicle, but there was another fare after his and they were dropped off in Wellesley.  He has an air tag installed in his wallet and it appeared that the wallet was in Wellesley.  Officer Kane responded to that address and the residents indicated they were home the previous evening and did not take a ride share.  There are no suspects. 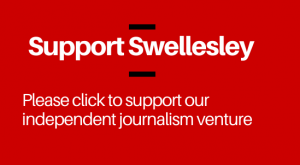