The forecast says the sun will come out in a couple of hours and chase off the mist. I could wait for that to happen, but to what end? An hour of gardening in the mist is better for the complexion than a day at the spa, therefore the DIY facial wins every time. Plus, since gardening counts as exercise, mist gardening counts as both spa time and gym time. I never regret choosing an hour in my Wellesley garden over something marketed heavily as “self care” that requires me to be inside. The spa and the gym will still be there in February. Today, it’s summer and the gentle mist draws me outside.

I’m not the only one. Looks like my gardening time is to be delayed. While I was in the shed with my back turned to the yard, the great blue heron glided in and took up sentry near a known rabbit hole. He’s been doing that lately. According to Mass Audubon herons like to hunt at the edge of a wetland. Technically my yard fits that description, the river being within four flaps of his great wings, and in view from the spot he’s staked out. Still, an expanse of freshly mown suburban lawn doesn’t seem like a heron’s ideal hunting ground. Unless you’re an epicurean heron. Instead of mucking about at the river’s edge stabbing sunnies and frogs, like all his friends, this guy’s in my yard for the never ending supply of scrumptious baby bunnies. Let all the other herons eat the same old thing day after day. My guy demands variety in his diet.

I take a seat in the shed for prime viewing of the scene. The heron’s stop at the specialty market that is my back yard could take awhile. I haven’t been able to find anything that suggests herons use their hearing to hunt, but my guy cocks his head as if he were listening for something, much the way a robin puts an ear to the ground when listening for the movement of worms, grubs, or other tasties. The 4-foot tall bird doesn’t take the trouble to bend all the way over. He just stands perfectly still. Once he’s good and ready, there’s just that cock of his head, then a lightning-fast stab with his sharp, dagger-like bill. The heron then throws his head back and that baby bunny slides down his gullet as neat as a shot of tequila. Satisfied for now,  the heron flies off downriver, full of prehistoric grace. Then, I would guess, all hell breaks loose in the rabbit warren after the abduction of one of their own.

Poor Mama Bunny. She tried so hard to get her family nicely situated. She’d been priced out of her childhood home, the prime real estate under the shed. Although that neighborhood had location, location, location going for it, the spot had become overcrowded, and a certain gardener was always stomping around overhead. Mama Bunny and many, many of her siblings looked at the seemingly endless expanse of green they’d peeked out at as young bunnies from the safety of the under-shed. When they grew up, they made the rash decision to ignored the obvious perils and set out.

What started out as a few timid bunnies cowering under the shed has become a brash, multi-generational clan that has leapt forth, multiplied, and radiated out every which way. After a springtime spate of intense den digging, my yard has been turned into a regular Watership Down. The problem is, with the exception of the coveted under-shed section, most of Watership Down Wellesley is a very dangerous neighborhood, indeed—hawks above, coyotes cutting through, and a heron slowly stalking from the depths of the river.

Even though I often curse the bunnies for their crimes against the garden, bunny-cide is always a little sad. Of great concern is Bunny Injured, who has somehow made it all the way to adolescence even though his left leg is almost useless. When startled, which is almost always, Bunny Injured forgets all about his left leg and tries to bolt. When he realizes he’s just moving in a tight circle and his enemy is still right there, Bunny Injured sits back, wild-eyed, and trembles and trembles. He’s grown too big to be of interest to the heron, but the threat of hawks and the coyotes will always be real. Bunny Injured will probably meet his eventual demise purely due to stress. 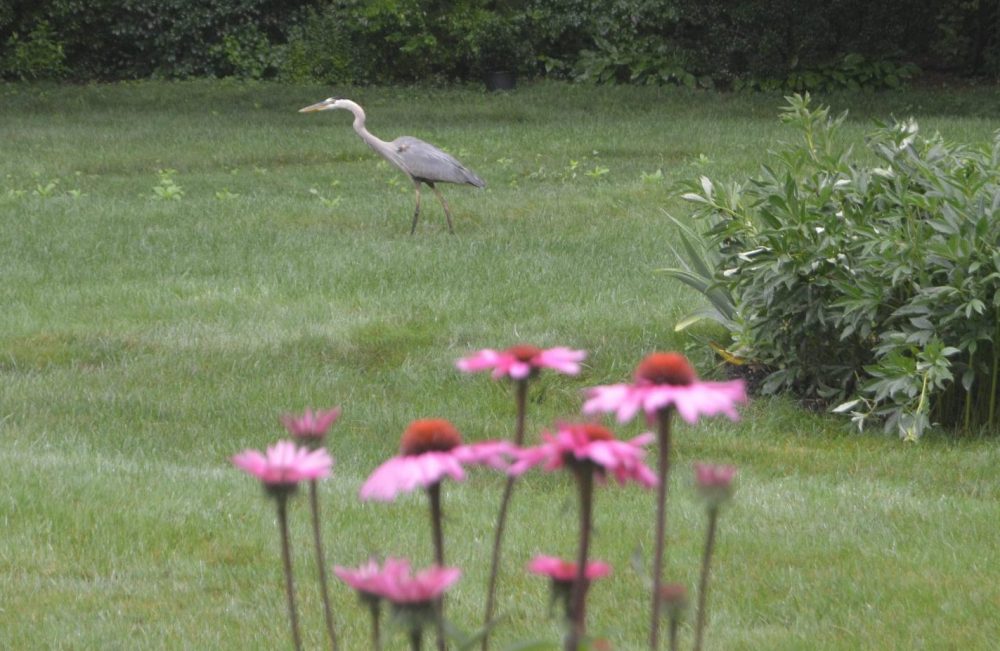 The heron hasn’t been back in a few days. A gaggle of 15 teenage Canada geese has been patrolling this end of the river, looking for trouble, and he probably doesn’t want to deal with their nonsense. Even though the young geese won’t be able to fly until sometime next month, they still think they’re all that, strutting around the yard, pooping wherever they please. The recent heavy rains have made it easier for them to breach the fencing. As herbivores, the geese aren’t interested in baby bunnies. They just want to annoy me, and they succeed. That they waddle faster than I can give chase is something I consider my own moral failing.

The yard is experiencing a rare moment of quiet, so I dash out to deadhead the daisies and stake the Joe Pye weed, which shot up to  6-feet when I wasn’t looking. For now I’ve taken control, so herons stay in the river, bunnies remain underground, and geese go far away. The gardener needs her hour.