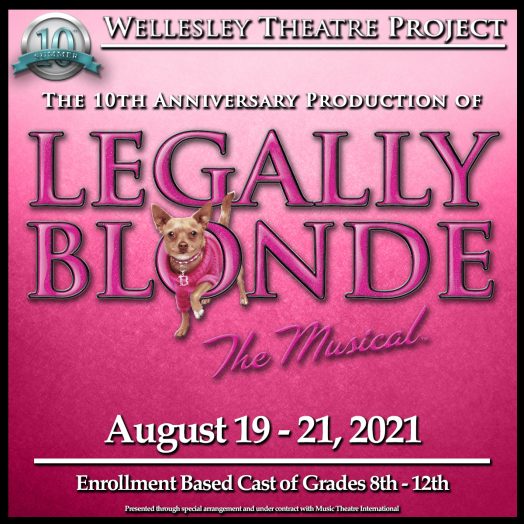 Wellesley Theatre Project’s (WTP) is celebrating their 10th anniversary with a revival production of Legally Blonde, The Musical, August 19-21, at the Wellesley Community Center at the WTP Outdoor Theatre, 219 Washington St. Attendees are asked to bring a folding/lawn chair or blanket to sit on. Parking is located next door at the Wellesley Hills Church at 207 Washington St. Wellesley. Tickets are priced $15 for adults and $10 for students and seniors, and may be purchased online at http://wellesleytheatreproject.org in advance, or at the door for $18 for adults and $12 for students and seniors.

Legally Blonde, The Musical features 23 hard working students between the ages of thirteen and seventeen years old, who have worked diligently over three weeks. These cast members reside in Wellesley as well as neighboring communities including, Needham, Newton, Natick, Framingham, Wayland and Cambridge.

WTP performed its first production of Legally Blonde, The Musical in August of 2012, during its first summer of programming. The show is based on the novel, Legally Blonde, by Amanda Brown, the 2001 film of the same name, and the Broadway show which debuted in 2007. Sorority star, Elle Woods, doesn’t take “no” for an answer. So, when her boyfriend dumps her for someone “serious,” Elle puts down the credit card, hits the books, and sets out to go where no Delta Nu has gone before: Harvard Law. Along the way, Elle proves that being true to yourself never goes out of style. Similar to the movie, the performance features “PG-13” themes and lyrics, but has an energetic and positive message.

For more information about Legally Blonde, The Musical or other Wellesley Theatre Project classes and productions, please visit www.wellesleytheatreproject.org or call 781- 235-1550.